A Silver Thread of Madness 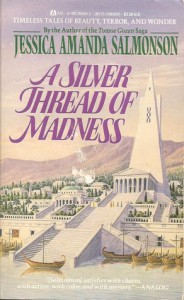 Jessica Amanda Salmonson deserves to be better known. Her Tomoe Gozen trilogy is one of my favorite fantasy series ever.

A Silver Thread of Madness is a collection of her short stories. It's divided into three parts. The first part, Six Legends, are legends, usually involving magic or divine beings, set in various cultural milieus (Russian, Arabic, Native American, etc.), demonstrating Salmonson's versatility. The second part, A Silver Thread of Madness, is a collection of very, very loosely related stories (the "thread" running through them all is, in fact, madness) ranging from modern fables to ghost stories to a couple that are akin to traditional horror. The third part, Tales of Naipon, consists of several short stories set in the same mythical feudal Japan as the Tomoe Gozen trilogy (Tomoe does not appear in any of them, however).

I thought it was an excellent collection, though I'd really give it 4.5 stars out of 5; while Salmonson writes in the preface that she considers short stories to be superior to novels in terms of literary quality, it's still her novels I truly love.
Tweet