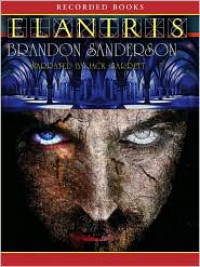 It's a good thing I started reading Brandon Sanderson's later works, and only listened to this audiobook because it happened to be on sale. It's Sanderson's fantasy debut, and while I wouldn't call it terrible (it's actually entertaining and somewhat original, like most of his work), it sure has all the signs of something written by a beginning author.

The main characters, Prince Raoden and Princess Sarene, are so noble and good and wonderful and pure-hearted they practically stepped out of a Disney cartoon to teach everyone else in their feudal fantasy world that slavery is bad and women can too fight and think for themselves. Sanderson heralds every plot twist with portentous description that tells us what we just read, a sort of literary "Dun-dun-Dunnnn!" (drumroll) that smacks of a writer who's not yet learned to trust his readers to "get it." The dialog is entertaining and humorous but overdone and prolonged at times. I hate to compare Sanderson to David Eddings because he's not nearly that bad, but it kind of reminded me of Eddings's inane banter between characters during inconsequential scenes.

Elantris has Sanderson's usual mysterious divinely-empowered world with an intricate, internally consistent magic system that works best for someone who thinks it through and figures out the "rules" (which of course Raoden does, figuring out in a few weeks what no one else in the past ten years has even tried). It also has Sanderson's usual fondness for elevating nobility above the common people, and if you are aware that Sanderson is a Mormon, well, you can detect a certain "vibe" in all of his books, having to do with the way religion and marriage works in all his stories, but it's particularly pronounced here. I wouldn't say it ruins the story, but it does make me twitch a bit.

In short, this is not Brandon Sanderson's best work. I liked the Mistborn trilogy and The Way of Kings, but you'd have to be a pretty rabid Sanderson fanboy to love Elantris.
Tweet