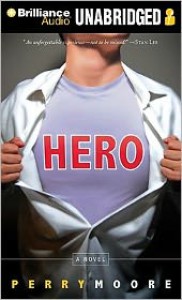 This is what you call a superhero novel with a message, that message being "Gay is okay." So, wonderful, it's a message I can support, but a redeeming message is not enough to make me love a book, and this book, while not bad, and certainly not disrespectful to the superhero genre, didn't really do anything original except make the hero gay. In fact, it was overall a pretty derivative story and I doubt it would have gotten much attention at all (or even published) if not for the central theme, that Thom Creed, the title hero, has two "secret identities," one as a superhuman, the other as a gay teenager whose famous ex-hero father is also a bit of a homophobe.

I say "a bit" because of course this is a father-son novel and so by the end of the book, heartwarming acceptance amidst heroic self-sacrifice occurs, and Thom Creed is happily paired up with his handsome boyfriend (also a closeted superhero) in the brave new world they have just saved.

For a gay teenager struggling with identity and acceptance and wanting to see someone like himself represented as a protagonist, this is probably a wonderful book. Me being old and cranky and cheerfully supportive of the whole Gay Agenda and anything else that makes bigots cry, I am glad books like this exist, but since I was mostly interested in the superhero story, I found it mediocre. Perry Moore makes no attempt to do anything original with superheroes, and even the satire is very familiar territory.

Not a bad read, but unless you're trying to earn a few diversity points on your reading list, I can't really recommend it as anything special.
Tweet