A First Dictionary and Grammar of L'Aadan 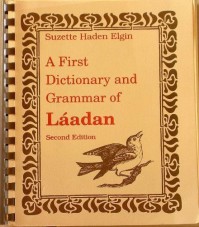 This is a book about a constructed language by linguist and science fiction author Suzette Haden Elgin; Laadan features in her "Native Tongue" sci-fi novels. Meant to be a "woman's language" capable of expressing "women's" concepts not easily translatable in most existing (real) languages, it's an interesting idea, though I find it questionable as to whether it would really serve its intended purpose even if a significant number of women could be persuaded to learn and use it. If you have a fondness for made-up languages like Klingon and Elvish, you may find this interesting.

Elgin at one point was making a semi-serious attempt to persuade women to adopt Laadan for communication purposes. I think its real failing (besides selling people on the idea of learning an artificial language in the first place, which has been a failure even with much broader efforts like Esperanto) is that it bears little resemblance to any existing native tongue, and asks speakers not only to learn an entirely new grammar and vocabulary, but to think in a particular way according to Elgin's notion of gendered communication.
Tweet