Death In Venice And Other Tales 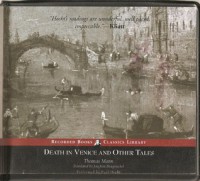 I stand between two worlds, am at home in neither, and in consequence have rather a hard time of it. You artists call me a commoner, and commoners feel tempted to arrest me ... I do not know which wounds me more bitterly. Commoners are stupid; but you worshippers of beauty who call me phlegmatic and without yearning, ought to reflect that there is an artistry so deep, so primordial and elemental, that no yearning seems to it sweeter and more worthy of tasting than that for the raptures of common-placeness.

IT'S SO HARD TO BE AN ARTIST, YOU GUYS!

Oh, God, I have heard Thomas Mann described as this towering literary genius, a monumental figure of German literature. So I was kind of looking forward to Death in Venice and other stories as a sampler before maybe I try one of his novels. Well, his short stories have killed that desire stone cold dead.

Okay, he's great with language. I won't deny it. He slowly, painstakingly, verbosely paints the inner and outer lives and pained souls of all these lugubrious connoisseurs of truth and beauty, who are all just so woeful and tormented and woe! woe! woe! But each and every story was slooooooow and went basically nowhere. It's like staring at a painting. And staring. And staring. And staring. The first few minutes, yeah, it's beautiful, and I suppose if you are a true lover of fine arts you can probably stare at it for hours and be entranced, but I would like to move on and look at something else.

The most interesting part of this collection was the translator's notes on how difficult it was to render Thomas Mann's elegiac German into equally elegiac English. The linguistic structures of German, which Mann makes proficient masterful use of, are different enough from English that translation requires nearly as much artistry as that possessed by the original writer. A straightforward idiomatic translation simply won't capture Mann's use of language.

I mean, for a bunch of racy tales about incest and an old writer who becomes so infatuated with a young boy that he stalks the kid all over Venice while moping about how unbearably beautiful the boy is, Mann managed to bore me out of my mind and also make me squirm at what a creeper he is, and it's not like I'm some short-attention-span teenager who can't stand literary fiction.

Oh yes, there are also lots and lots of allusions and metaphors. Death in Venice is a protracted exercise in literary allusions, as are Sieglinde and Siegmund in The Blood of the Walsungs.

She kissed him on his closed eyelids; he kissed her on her throat, beneath the lace she wore. They kissed each other's hands. They loved each other with all the sweetness of the senses, each for the other's spoilt and costly well-being and delicious fragrance. They breathed it in, this fragrance, with languid and voluptuous abandon, like self-centred invalids, consoling themselves for the loss of hope. They forgot themselves in caresses, which took the upper hand, passing over the tumult of passion, dying away into sobbing...

Aww, that's so sweet and kind of steamy.

Oh, by the way, they're brother and sister.

So, from the incestuous Sieglinde and Siegmund to the tormented, angsty, artist Tonio Kröger to the doomed writer Gustav von Aschenbach in Death in Venice, there are an awful lot of whiners and people who are either having inappropriate sex or wallowing in misery thinking about people they want to have inappropriate sex with. This is stroke fiction for tormented German intellectuals. I really, really wanted to like this collection 'cause like I said, Thomas Mann is supposed to be epically great and I can't even...

This collection included the following stories, of which only a couple left an impression on me and the rest kind of passed over me as I sank into a glazed stupor:


The Will for Happiness
Tristan
Little Herr Friedemann
Tobias Mindernickel
Little Lizzy
Gladius Dei
The Starvelings: A Study
The Wunderkind
Harsh Hours
Tonio Kröger
The Blood of the Walsungs
Death in Venice


Okay, go ahead and tell me I'm an uncultured peasant. But I'm starting to think I just don't like German literature. I still need to give Hermann Hesse one more shot, and maybe, maybe, I will try one of Thomas Mann's novels. But not any time soon. I am giving this 2 stars, which I'm sure is a crime against the Aesir, but even though I normally rate books based on a combination of how well I enjoyed them and how well-written I think they are, and Mann is a great writer, I can see that, 3 stars would mean that I didn't find the experience completely unenjoyable, and frankly, I was dying to be done with this.
Tweet