The Children of the Sky 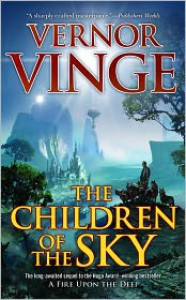 I can't say I waited twenty years for this like Vinge's long-time fans, since I only read A Fire Upon the Deep last year, but damn it was good to read another Vinge space opera. His Zones of Thought books now rival David Brin's Uplift series for my favorite SF. Vinge writes awesome, galaxy-spanning tales that manage to preserve some level of believability given a populated galaxy with super-advanced FTL technology, and he's particularly good with aliens, as he has proven with A Deepness in the Sky and A Fire Upon the Deep.

Unlike the previous two books, The Children of the Sky is a direct sequel to A Fire Upon the Deep. It takes place on the Tines' world, about ten years after the Battle on Starship Hill. Our old friends Ravna Bergsndot, Jefri and Johanna Olsndot, and Amdiranifani are back, along with Woodcarver, Pilgrim and several other Tines characters from the previous book, as well as many new human ones. The Children rescued from the Oobii's coldsleep caskets are now growing up on this medieval, alien world deep in the Slow Zone, and they aren't happy about it, especially those who remember living in the High Beyond where lightspeed is not a barrier and technology is far more advanced.

As usual, the alien but relatable psychology of the Tines is one of the best parts of the book; this pack-minded species is incredibly difficult to write about clearly, and yet we get to know each Tines character as clearly and distinctly as the human ones thanks to Vinge's writing. He makes his aliens as varied as the humans - some Tines are comical, some are sinister, some are friendly, some are sadistic monsters. In this book we also meet the Tropicals, who live in vast "Choirs" that are city-sized orgies of madness compared to the northern Tines that the humans are familiar with.

The main conflict comes from (human) Children who aren't satisfied with the rate of technological progress that Ravna and her Tines allies are making, and Tines who do not trust Woodcarver and her human "friends." There are a variety of conspiracies, double-crosses, and betrayals; Vinge excels at complicated multi-species skulduggery where you're never sure who will end up on which side in the end. This was a great, perfectly organized adventure tale from start to finish, with sympathetic heroes and heinous villains. If you have read the first two Zones of Thought books, then this is an absolute must-read, and if you haven't, why the hell not?

Now, after all that fanboying, I have to ding The Children of the Sky by half a star, because in all honesty, while it's great, it's not quite as great as A Fire Upon the Deep. First of all, I thought one of the villain's motives, in particular, were never really explained; his goals made a certain amount of sense, but in many ways he seemed to be evil for the sake of being evil. I saw the betrayal coming, but I never did understand why. Second, if you like space opera, this book really isn't one; it takes place entirely on the Tines' world, which is for the most part still stuck at a pre-industrial tech level, though the humans are starting to change that. The only off-planet events are some very brief references to the Blighter Fleet. And regarding that, the last book was fairly self-contained, although obviously some loose ends were left dangling. This book doesn't end quite so decisively, as several great big issues are left unresolved. On the plus side, that means we can (I hope!) expect another sequel. On the minus side, this one took twenty years...

4.5 stars, but it really deserves 5 stars, it's just not quite as awesome as the first two books.
Tweet