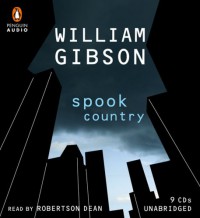 I struggled to find a reason to give this 3 stars and... I couldn't. Because the first book in the series, Pattern Recognition, was okay, and I gave it 3 stars, and this book just... did nothing for me. Usually 2 stars means I actively disliked or was annoyed by a book (as opposed to 1 star, which means I hate it with the passion of a thousand burning suns), but Spook Country just bored me.

Part of the problem was that it's a multi-POV book with short chapters switching between a very different cast of characters. There's Tito, the Russian-speaking Cuban-American who's a member of some sort of espionage/crime family, who practices a blend of Russian systema and Santeria. There's Milgram, the drug-addicted Russian interpreter who's the semi-hostage sidekick to a shady quasi-government operative named Brown. There's Hollis, a former band member-turned-journalist. And there's Bobby, a paranoid who does something shady with military equipment.

They are each wrapped up in their own storylines that gradually intertwine, but the whole book is cast in shadows and opacity. Gibson achieved an appropriate tone for the story, but failed to engage me on any level. By the time we find out what is going on and how it involves all these people (it involves money laundering and corruption and the Iraq war), I didn't really care except to find out why I'd been following along this far. All of the characters were interesting in concept - that is, Gibson came up with cool ideas for characters - but I was never invested in any of them, and none of them had much of a "voice."

Gibson is a fine writer, especially in this genre, and the plotting was decent enough. But my reaction to this book was a great big "MEH." I have zero desire to read the third book in the series.

(Also note that while this is a "series," the books are only loosely connected. One character from Pattern Recognition plays a part in this book, but they're otherwise pretty much unconnected except maybe thematically. So it won't matter if you read them out of order.)

Sorry, Gibson, maybe it's not you, it's me. Other Gibson fans seemed to have liked it a lot, and maybe if I read it in a different mood, or while paying closer attention, I'd have liked it more.
Tweet