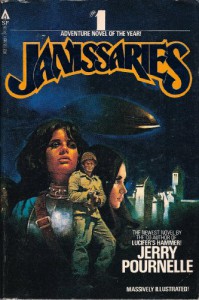 Read this years ago, I remember enjoying it pretty well. Basically, you have a bunch of mercenaries who have been sent on a suicide mission by the CIA. They get abducted by aliens, who tell them that since they're supposed to be dead anyway, no one will miss them. Then they're taken to another planet, where it turns out the aliens have been relocating Earthlings for centuries. It's basically a medieval world with its own history and cultures, but the 20th century soldiers upset the balance of power with their weapons, so for all practical purposes, it's a time travel story of a familiar sort -- modern soldiers conquer and establish an empire in a more primitive era. The catch is the aliens' agenda.

I think I read the first couple of books in this series, but I don't remember the later ones much.
Tweet