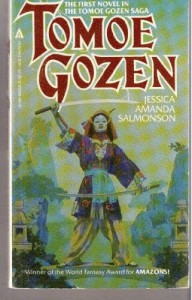 This is one of my favorite fantasy novels of all time. This is basically the story of the 12th century civil war in Japan that established the samurai class, and it's historically accurate except that it's set in an alternate-earth version of Japan where magic and magical beings are real. Thus, Japanese history and myth are combined in an exciting, epic tale.

Tomoe Gozen was an actual historical figure, though of course Salmonson has created a completely fictional version based on what little is known of the real person.
Tweet