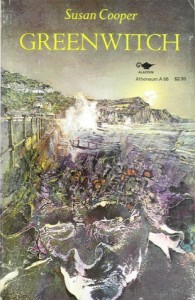 Continuing my reread of my favorite childhood series, I remember that I found Greenwitch less interesting than the book before it or the books that followed — basically, a mid-series slump. This was my impression on rereading it many years later; it's not bad, but a fairly typical children's fantasy, and doesn't quite have the dark foreboding of The Dark is Rising nor the epic build-up of the end of the series.

I remain convinced Susan Cooper is a talented and under-rated writer. But while she has a better command of the English language than her inevitable comparison, J.K. Rowling, her children are more realistic and thus not nearly as exciting.

In Greenwitch, Will Stanton, the last of the Old Ones, the main character of The Dark is Rising, meets the Drew children who were the protagonists in the first book, Over Sea, Under Stone. Once again they're on a quest to retrieve an artifact before the Dark gets it. The key is the Greenwitch, an annual Cornish tradition in which the local villagers create an effigy of hawthorn and rowan and toss it into the sea. The Greenwitch is a powerful being of Wild Magic, neither of the Light nor of the Dark.

Cooper skillfully involves the Drew children, who each have their part to play in winning the battle for the Light, even though they're just ordinary children, while Will Stanton, simultaneously an eleven-year-old boy and an enormously powerful Old One, accompanies Merriman on a journey to the ocean depths. Ultimately it's not magic or confrontation that wins the day: it's the little choices and small kindnesses of ordinary people, which was a nice message and far more deftly done than Rowling's attempts at delivering moral fiber.

That said, this is a very G-rated adventure, so reading it as an adult, there's something a bit twee about those meddling kids following a minion of the Dark around and even going into his home, and emerging pretty much unscathed. Charming, but utterly lacking in punch or tension. On the other hand, the descriptions of Tethys and Greenwitch, the creatures of Wild Magic, had a grandeur and majesty worthy of any epic fantasy.

Still enjoying the books, but 35 years makes a difference in the rereading.
Tweet