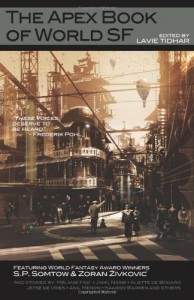 This is a collection of 15 short stories from non-US/UK writers. While several stories fall into the traditional SF category, some are straight fantasy/horror, and a couple are hard to describe. Reading this collection is sort of like sampling from a buffet of foreign dishes you've never tried before: some of the offerings are familiar, some are unfamiliar but delicious, and a few are just odd and unappealing. There are a couple that probably read much better in the language from which they were translated. Below is a quick summary of each:

The Bird Catcher: Set in Thailand, about a serial killer.

The Levantine Experiments: Very weird story about a child used as a scientific experiment. Not really horrific, but strange.

The Wheel of Samsara: Another strange story that's hard to describe. A scientist studies a prayer wheel in a remote Tibetan monastery.

Wizard World: I think this Chinese story suffered most in translation. A denizen of an online world vs. hackers.

L'Aquilone du Estrellas: This is more of a fairy tale, about a girl who goes on a lifelong quest to win the attention of the man she is in love with, accompanied by a boy who is in love with her.

Cinderers: An arsonist with psychoses; hard to describe further without spoilers.

The Allah Stairs: One of my least favorite stories in the collection. A couple of childhood friends discover that a classmate's fantastic stories weren't so fantastic.

The Biggest Baddest Bomoh: Not so original, but well written: a Malaysian clerk seeks out a shaman to help him win the heart of a woman he's in love with.

The Lost Xuyan Bride: One of my favorites. A PI takes on a job to find a missing girl, set in an alternate history where the Chinese colonized western North America and the Aztecs still occupy southern Mexico.

Excerpt from a Letter by a Social-Realist Aswang: Very short but amusing letter from a Filipino Marxist vampire, with some meta-commentary on the sci-fi genre.

An Evening in the City Coffeehouse, with Lydia on my Mind: A futuristic pornographer films the wrong subject.

Into the Night: An elderly, traditional Tamil man has trouble adjusting to his daughter's world of science and virtual reality.

Elegy: A woman's children go missing; you have to draw your own conclusion as to whether she's right about who the culprit is, or if she's simply gone mad with grief.
Tweet