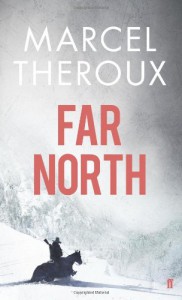 If you're looking for a novel with a strong female protagonist who is never overshadowed by any male characters or caught up in romantic subplots, Far North beats most of those I've read.

The strength of this novel is the protagonist and first-person narrator, Makepeace. She's tough, practical, and capable of being violent when she has to be, but never without purpose or remorse. She has a very straightforward way of telling her story -- she doesn't seem to dwell on things or spend too much time doubting herself or bemoaning her often tragic circumstances. But the author (through her) still describes her environment in all its vast, frozen majesty, and also describes the way society fell apart, the way decent people act very badly, and, gradually, things that happened before Makepeace was left alone, before everyone she knew died, which come back to haunt her years later. It's a stark but textured novel. None of the characters are saints, and they're mostly sinners, but no one is purely evil. Makepeace makes a lot of decisions, some good and some bad, and then lives with them.

This story of a lone survivor in an empty land follows the trend of many recent post-apocalyptic novels, in that the exact nature of the apocalypse and how civilization fell isn't specified, though there have obviously been climactic changes, and there are hints of a big collapse precipitated by shortages, wars, and other disasters.

The ending was neither happy nor sad. When civilization falls, you're not realistically going to see some bright new world rising out of the ashes any time soon. At best, you'll see a gleam of hope for future generations, and that's what you get here.

I debated between 4 and 5 stars. I'd probably give it 4.5, but I'll be generous and round up to 5. I have no specific complaints, as the writing was richly descriptive, nothing pushed my suspension of disbelief, and the characters were all complex and believable. I guess my hesitancy is that the story itself didn't quite jump off the page for me until the very end. But overall, one of the better books I've read recently.
Tweet