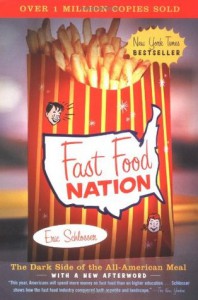 This is one of those books like Upton Sinclair's "The Jungle" that tells us truths about our food that we sort of already knew, or at least suspected, but probably didn't really want to have dragged out into the harsh light of day to be confronted. No one reading this book is going to be surprised to learn that fast food isn't very good and isn't very healthy. But you will learn just HOW unhealthy it is. It's not just that the raw materials are of low quality and processed beyond recognition, until they're almost devoid of nutritive content. It's also that the regulatory agencies we think are ensuring the safety of the food we eat are under the thumb of the fast food industry, and this book tells some real horror stories about contamination and unsanitary food preparation.

But "Fast Food Nation" won't just appall you with regard to what you put in your mouth. It also tells us how the industry works, how fast food has contributed to the decline of the family farm, why so much of America's farmland and beef and chicken industries exist to service fast food chains, and the dirty, dangerous, and low-paid conditions in which employees throughout the supply chain work. Your Big Mac has a real cost, both economic and social.

The author did not write some kind of socialist anti-business screed, though. Schlosser writes with humor and an appreciation for the quintessential Americanness of fast food. He traces the rise of McDonald's and Carl's Jr., and how they are linked to Disney, takes us inside their corporate headquarters, and shows us some other American businesses that have resisted the mass produced uniformity of fast food.

"Fast Food Nation" takes a long hard look at the industry, but it's not an expose so much as an "unauthorized biography"... of the business and the people involved in it.
Tweet