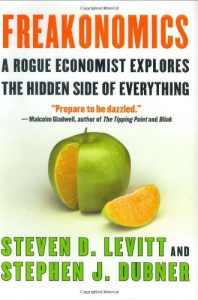 On the surface, "Freakonomics" is a collection of interesting factoids and anecdotes leading to conclusions, some of which are very counterintuitive. One of the most interesting chapters is the analysis of the economics of crack-dealing, based on a graduate student's "fieldwork" where he hung out with a gang for months and learned just how the business worked. (Bottom line: it's just like a typical corporation, where the low-level "footsoldiers" do the gruntwork for very little pay, hoping to make it into middle management and eventually the "executive" levels.) The authors aren't afraid to examine inflammatory subject matter, either, all while trying to remain strictly neutral regarding the political and moral ramifications of their conclusions. They point out that swimming pools are far more dangerous to children than guns, but don't take a position on gun control. They examine the hysteria about "superpredators" that you may remember from the 1980s -- what was supposed to be an apocalyptic crime wave of sociopathic teenagers which never materialized. They argue rather convincingly that legalized abortion did more to lower crime rates than anything else, but they do not present this as an argument in favor of abortion and take great pains to point out that there is no racial component to this argument either.

But, what is "Freakonomics" about? The authors say at the outset that their book really has no theme; it's just a book about interesting things you can learn by looking at economic data. I suggest, however, that the book really does have a theme. It's about examining evidence impartially, being willing to look at what the numbers tell you, even if they lead to conclusions that contradict conventional wisdom or your own beliefs. Most importantly, the authors spend a lot of time taking the reader by the hand in studying the difference between correlation and causation. That is, the fact that two phenomena appear to be related does not mean that one caused the other. They give many examples of correlated statistics, and then demonstrate how one can go about determining whether or not there is causality involved.

In this respect, "Freakonomics" should be required reading for every high school student, as it explains clearly and in an interesting manner some basic critical thinking skills that would go a long way towards a more educated public.
Tweet