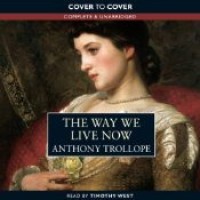 This was a fantastic melodrama, worthy of being compared with any other Victorian novel, with a large cast of characters, a dozen subplots, and a biting, satirical wit that Trollope applied to what he saw as the greed and lack of class evident in London in his day. Other reviewers have commented on how Augustus Melmotte is entirely believable as a 19th century Bernie Madoff, and his ponzi scheme house of cards has been seen over and over again on Wall Street. But if The Way We Live Now were just a book about greedy high society types being taken in by a con man, it wouldn't have as much to recommend it. What makes this book great are the characters, from Melmotte himself to the many other players large and small, all of whom do wind up being interconnected in some way, though not all tie into the central storyline.

Of course a great deal of the book is taken up by marital intrigue -- that is to say, pretty much everyone is trying to get married. Some are trying to marry for love, some for financial security, some start seeking one and wind up choosing the other, but there are so many couples and would-be couples in this book, you almost need a dance card. They're each and every one of them different, with their own vividly described motives. Some are dastardly, some are grasping, some are naive and sweet, some are vulnerable, some are just weak. A few are even noble. But it's all a grand drama, and Trollope, paid by the word like most authors in his day, gets to indulge the reader in chapters full of resolution for each individual character in a way that modern novels, which favor tightness and paring away of unnecessary subplots and secondary characters, don't allow. It's a big, wordy book but if you like dramas, every bit of it is entertaining.

Fans of Dickens or Austen should love this; of course Trollope was a late Victorian author, so a contemporary of Dickens and well after Austen's time, but the class inequality, mismatched lovers, and balancing of love and affection with financial security is certainly reminiscent of Austen's themes. Trollope writes from a male POV, of course, but his women turn out to be just as well realized (and have as much agency, within the restrictions their society allows them) as the male characters; I think Dickens often didn't do as good a job of writing female characters.

Lastly, I listened to this as an audiobook (32 hours! It's one of those books that Audible.com periodically puts on sale for $4.95), and I think it made it even more entertaining. The narrator was excellent, and brought just the right tone to his reading to bring out the wry humor that might not be quite as evident if you're reading Trollope's rather dry, stiff 19th century prose off the page.
Tweet