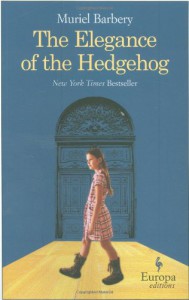 I don't know what book list or recommendation caused me to pick this up, but it goes into my "Not sorry I read it, but not interested in any more from this author" box. It's a French bestseller translated into English, and I think the translator did a fine job in preserving the pretentiously precious prose of the original. (I'm assuming, since I can't read the original French, but it feels very French.) This book is beautiful and poetic in places, but mostly it's pretentious and silly masquerading as profound. I felt like I was watching a French film reading it.

So basically there are two main characters: Paloma, a super-bright twelve-year-old girl from a super-rich family who, like most super-bright twelve-year-olds in rich families, thinks her parents and older sister are a waste of space and only she sees through the hypocrisy of society and the pointlessness of existence. So she's decided she's going to burn down her apartment and commit suicide before her thirteenth birthday.

Then there is Renee, the concierge of the extremely expensive Paris apartment building where Paloma's family and a bunch of other rich people live. Renee is a dumpy old widow from a rural peasant family who's been the concierge at this building, being ignored by its snooty, elite residents for 27 years, all the while hiding that she is also a closeted genius who spends all her time reading Kant and Tolstoy.

And... that's the first half of the book. Paloma writes "profound thoughts" in her diary and Renee muses on how oblivious and prejudiced her rich apartment dwellers are and how much it annoys her that she occasionally has to interact with them and pretend to be stupid so they'll continue to ignore her. This is a book that is mostly made up of inner monologues, with tons of name-checks of famous writers and philosophers so you'll know that Paloma and Renee are both really smart and really well-read. Sometimes their entries/thoughts really are quite profound, but usually they just come off as self-conscious snobs who might be smarter than the people around them but really aren't much nicer. There are bits of humor I enjoyed, but mostly I appreciated the very short chapters. This is a good book to keep in the bathroom for "seat time," ya know what I mean? The chapters do fly past since mostly they're just day-to-day incidents in the lives of Renee and Paloma.

Eventually something resembling a story appears out of the misty swirl of phenomenology and Tolstoy references. A new resident moves in, a wealthy Japanese man, and he's smart and perceptive and immediately sees through both Paloma and Renee's disguises. So finally there is some real human interaction and genuine friendship going on. But still, not much story. The ending is exactly the sort of bittersweet/tragic denouement that seems prescribed for such highbrow French literary bestsellers. Never fear, Burberry would not subject you to anything as pedestrian as an apartment fire, a suicide, or a sex scene, any of which would have livened the book up considerably.

Despite thinking the characters were not nearly as likeable as the author wanted us to think they were, and finding the story mostly boring and pretentious, I give this book three stars rather than the two I'd probably give a genre novel that let me down this much because it was different, interesting because I haven't read a lot of books about France, and the characters were, while annoying, mostly believable (except Kakuro Ozu, the rich, privileged dude with the heart of gold who's just too good to be true), and I thought the author conveyed her message fine. And I appreciated her use of language. Probably this would be a more pleasurable book to read in French. But it would still be one of those artsy books everyone coos over at book clubs and no one is going to remember twenty years from now.
Tweet