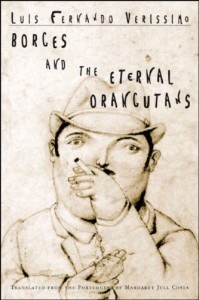 Okay you guys who've been pushing all those "bizarro" novels: take your favorite bizarro author, and Jorge Luis Borges will totally drink his milkshake. Even as a fictional character.

Borges wrote what's called "magical realism" nowadays, but while his fans may think "fantasy" is too undignified a label, Borges himself was a huge fan of science fiction, fantasy, and pulp fiction. The murder takes place at the Israfel Society Conference (Edgar Allen Poe was one of Borges's favorites), so you have Borges (a real person) fictionally attending a fictional conference studying a real author whom Borges really numbered among his influences. This book is a tribute to Borges and Borges's fiction, and Verissimo actually has the cajones to use Borges as a character in his Borges homage. In fact, the narrator is an author, addressing his narrative to Borges, and in the end, Borges answers back.

Under all this meta-fiction, the book is a locked-room murder mystery (with an unreliable narrator, another Poe element), and you can read it on that level, but you won't come close to appreciating it unless you've read a few of Borges's short stories.

Brazilian author Luis Fernando Verissimo totally nails the feel of a Borges story, and while this is a novel (Borges famously only ever wrote short stories; he wrote no novels), it's a short one, which also makes it more believable as what could have been just a really long short story by Borges. Since Borges writes the ending (... just read it) you might find yourself repeatedly checking the cover to remind yourself who the author really is.

If you haven't read anything by Borges, you are missing a treat. Go read Labyrinths or Ficciones. Then read this book. Then read some Poe or Lovecraft. Not necessarily in that order.
Tweet