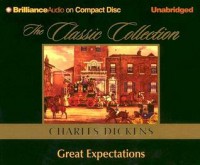 I don't understand people who say they hate Dickens and find him boring. He was a master wordsmith. He crafted humor, sadness, pity, nobility, and pathos with ease. He could be witty, ironic, and occasionally melodramatic. Great Expectations is the quintessential Dickens novel. Featuring a likable but rather meek orphan named Pip, raised by his tyrannical older sister and her gentle blacksmith husband Joe, it's full of stock Dickens characters and Dickens dialog, which is a treat to be savored, not disdained because it's "old-fashioned" and Victorian.

Starting with Pip's chance meeting with an escaped convict, an incident that makes quite an impression on the child but seems to have no bearing on the story that follows, Pip is then invited to play at the house of the local rich and crazy lady, Miss Havisham:

"Now," said Mrs. Joe, unwrapping herself with haste and excitement, and throwing her bonnet back on her shoulders where it hung by the strings, "if this boy ain't grateful this night, he never will be!"

I looked as grateful as any boy possibly could, who was wholly uninformed why he ought to assume that expression.

"It's only to be hoped," said my sister, "that he won't be Pompeyed. But I have my fears."

"She ain't in that line, Mum," said Mr. Pumblechook. "She knows better."

"Well?" said my sister, in her snappish way. "What are you staring at? Is the house afire?"

"And she is a she, I suppose?" said my sister. "Unless you call Miss Havisham a he. And I doubt if even you'll go so far as that."

"Is there any Miss Havisham down town?" returned my sister.

"She wants this boy to go and play there. And of course he's going. And he had better play there," said my sister, shaking her head at me as an encouragement to be extremely light and sportive, "or I'll work him."

Miss Havisham has a young ward named Estella, a perfect little ice queen who taunts and teases and scorns him, and so of course becomes the focus of his unrequited love for the rest of his life.

Not long thereafter, the young orphan is told by a lawyer that he has been bestowed with "great expectations" by a mysterious benefactor. He sets off to London to become a gentleman, and the bildungsroman proceeds in a Dickensian fashion. Dickens never wastes a character -- even minor characters introduced early in the book reappear later. The way he ties up his stories is impressive to watch -- like a knitter expertly tying off every loose end. Coincidences, improbable twists, exaggerated characters? So what -- Dickens was a better plotter and storyteller than 99% of writers today.

Great Expectations is a rather dark and melancholy tale. The ending is not exactly a downer, but it's not an everyone-lives-happily-ever-after one either. Neither is there as much social commentary in this book as in some of Dickens' other novels. It's not my favorite Dickens work, but it's a worthy classic and definitely worth reading when you're old enough to enjoy it for its own sake and not just because it was on your high school reading list.
Tweet