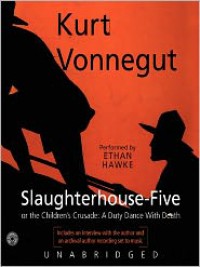 Kurt Vonnegut was a genius, but he's not for everyone, and the few times I've read him, he just hasn't done much for me. Thus I feel bad about not giving this book a higher rating as I know it's a great classic and a poignant, satirical treatise against war, but damn, was it weird and nonlinear and hard to follow. I enjoyed the audio narration by Ethan Hawke a great deal, but nonetheless found my mind wandering frequently while listening.

Billy Pilgrim's experiences during World War II (echoing Vonnegut's) are vivid and full of violence and pathos, and then he is abducted by aliens and sent hither and yon, past, present, and future, and keeping the narratives straight becomes quite mind-bending. He has simultaneous existences as a soldier, as a POW, as a settled, post-war family man, and an exhibit in an alien zoo. There's also Vonnegut's fictional science fiction author Kilgore Trout, and it all mixes together messily with moments that are sometimes funny and sometimes horrifying.

I may give this another read someday and see if it hits me more favorably a second time around.
Tweet