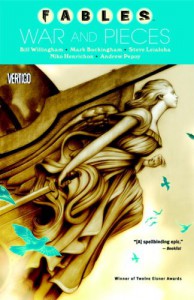 Bill Willingham's Fables is one of the few series I've stuck with since the beginning, and while it hasn't always maintained the quality and excitement of its best issues, it's been consistently entertaining without falling into too many predictable patterns, thanks to a single ongoing storyline that has dominated everything else: the war between Fabletown and the world-spanning magical empire of the Adversary.

In this trade paperback collection, the war comes to an end, which is an impressive milestone in itself. How often does a continuing comic book series predicated on some ongoing conflict that theoretically will reach an endpoint eventually actually reach that endpoint? Here, the Fables go to war with the empire and fight it to the end -- no kidding, no ambiguous ending, no new Adversary immediately rising out of the ashes to continue the struggle. And yet, the series is continuing, which means Willingham now has to create new stories and a new story arc.

So, being a graphic novel, there's no special effects budget and Willingham pulls out all the stops in an epic magical war with everything from bunker-buster bombs dropped from flying carpets to flights of dragons to endless hordes of goblins charging machine gun-wielding woodland animals. Fables will be a really, really expensive project if Hollywood ever tries to film it. And the Fables' tactics are as clever and ingenious as always.

That said, Willingham has a habit of using deux ex machinas with one Unstoppable One-Of-A-Kind Magical Artifact after another. The Fables' entire strategy depends on things like Boy Blue's Witching Cloak, which is an all-purpose teleportation device with unlimited carrying capacity + cloak of invulnerability, and a flying ship loaded with modern weapons which can outgun any dragon or sorcerer they send up against it. But Willingham overestimates the effectiveness of modern firearms -- if you're outnumbered by hundreds-to-one, some of the enemy are going to slip through, especially since they do have ranged weapons of their own, even if they are inferior. It's also annoying that the Fables have all these wonder-weapons and artifacts and Fables with super-special charms, and the Empire, which spans hundreds of worlds and has armies of sorcerers, only has a handful of tricks up its sleeve. Where are all the Empire's magical doomsday weapons and failsafe plans?

I probably should have expected this way back when Willingham (who's kind of a right-winger) had Bigby freakin' Wolf using Israel in his military metaphors. And the bad guys in this book actually give a "Woe is us, how could we have been so stupid?" speech about how being a police state with strict gun control is the reason why they're losing the war. So Willingham definitely gets up on his soapbox at times.

It was still entertaining, and satisfying to see an honest-to-gods conclusion to the big storyline that's been driving the series since the beginning. So, I'll be interested to see where Willingham goes next. (Hopefully without any Tea Party analogs.)
Tweet