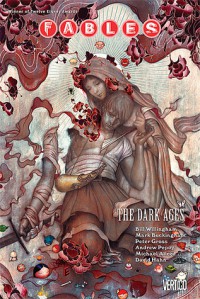 This is the first post-war volume. I was wondering what Willingham would do now that the Adversary has been defeated and the Empire has been destroyed. He ended up going with the "New Dark Lord" storyline -- so, the Empire had a lot of really dangerous, powerful, evil magics all bottled up while Geppetto was running things, and now they're being unleashed. Hence, a new Big Bad who right off the bat kills off a few notable Fables and then destroys Fabletown. And that's just in the beginning.

While I enjoyed the story, and it was interesting to see the Fables beginning to explore more of the universe and their place in it, asking questions that haven't been asked in all the time they were at war with the Empire, I still wish it didn't look like we're just going to have another large multi-volume story arc in which they try to figure out how to defeat another super-powerful evil magical being. One of the virtues of the Vertigo line is that it can publish series that are long-running, but not necessarily endless. Whereas you know that the fundamentals of the DC Universe will never change permanently (they might mess around now and then with Superman's origin, marry him to Lois Lane, or even do a 12-issue miniseries where they "kill" him, but he's always going to come back and he's always going to be Clark Kent and Lex Luthor is always going to be his nemesis), in a series like Fables, there is no guarantee that it won't end eventually, and that things won't change radically along the way. Hence the actual end of the war that had been going on since the start of the series, and the destruction of Fabletown, which has also been a constant since the start of the series, in this volume.

That said, since we have seen Fables return from the dead before, I'm not entirely convinced that the characters Willingham killed off will remain dead, since we know with supernatural magical beings, he can bring them back any time he has an excuse to do so.

So anyway, the series is still good, but it's starting to recycle things just a little, so I hope it's not limping along in this vein ten years from now, still doing more story arcs with Big Bad IX.
Tweet