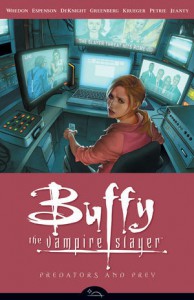 This volume is a series of loosely-connected one-shots, which were entertaining enough but again, didn't really feel like the next link in an epic story chain, even if a few of the events were significant. (Dawn goes through her third transformation and then is finally back to normal.)

This volume did bring lots of old characters back, so it felt like a few episodes of "Where are they now?" Starting with our old friend Harmony, former second banana in the Sunnydale Mean Girl clique, and now a vampire, she manages to get a reality show and suddenly turns vampires cool. This whole phenomenon of vampires and Slayers instantly becoming known to the public at large happens with little explanation and is largely played for laughs, though it forces the Slayers to go underground as Harmony and her hip bloodsucking friends convince the public that Slayers are evil fascists on a crusade against people not like them. Props for breaking away from the "secret war" theme that dominates almost every urban fantasy, but it didn't feel like the big event it should have been.

In another episode, we finally see Giles and Faith in action. While they were both in top form and as snarky as ever, the story itself was a fairly typical demon hunt and mop-up operation.

The Japanese vampire kitty dolls were almost worth the price of the entire volume, and the "geek bonding" between Buffy and Andrew was also funny. One thing that is nice to see is that Buffy's characterization remains spot-on -- she's not just a Slayer, she's the Slayer, and she still has the weight of the world on her shoulders, and she's grown up a lot, but she's also still just a young woman who, if she had the choice, would rather be shopping.
Tweet