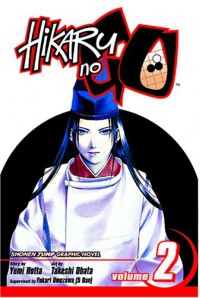 This series is surprisingly appealing. It really helps if you have some basic familiarity with go, and especially how it resonates through Japanese culture, but at heart it's becoming a coming-of-age story for both Hikaru Shindo and his young rival, Akira Toya, a go prodigy whose confidence was shattered by being defeated by Hikaru, not knowing that Hikaru was actually being coached by the ghost of a thousand-year-old go master.

In volume 2, Hikaru actually starts taking an interest in go and joins his school's tiny, underdog go club, and meets some other characters, including another young go prodigy who abandoned go to play shogi (Japanese chess). Hikaru also begins having to deal with girls, as his little friend Hikari obviously has a crush on him. Unfortunately, Hikaru deals with her about as suavely and maturely as any eleven-year-old boy. But I'm sure this will be an ongoing issue.

This isn't exactly a deep or brilliant manga, but it's quite charming and the characters are engaging. Now I guess I will have to go acquire the rest.
Tweet