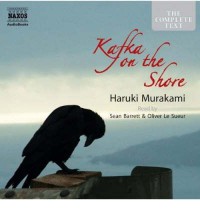 Haruki Murakami is a fascinating and interesting writer and boy howdy is he preoccupied with his penis. I mean, his protagonist's penis. Penises in general. Every book of his I've read is penispenispenis.

But boy can he write. Kafka on the Shore is "magical realism," which as the old joke goes, is "fantasy when it's not written in English." More seriously, it's one of those books where otherworldly things happen that the reader is asked to simply accept. There is no explanation for how someone can exist simultaneously as an old man and a fifteen-year-old boy in order to be in two places at once, or why conceptual incarnations take the corporeal form of Colonel Sanders, or why Nakata can talk to cats.

Kafka Tamura is a teenager running away from his father's Oedipal prophecy. The voice in his head is a boy named Crow, who tells him he must become "the world's toughest fifteen-year-old." He takes up residence in a library overseen by a gender-bending librarian, encounters a woman who may be his mother and a girl who may be his sister, and screws both of them. It may be a dream. But Murakami describes every encounter in very corporeal detail. Penispenispenis!

Meanwhile, Nakata, an old man who was mentally damaged/traumatized by an event that happened to him at the end of the war but left with the ability to talk to cats, has to find a family's housecat and stop a cat serial killer. This leads to him becoming a fugitive, where he encounters a truck driver who joins him on his quest to find a stone, in a bizarre urban Japanese inversion of your typical fantasy quest.

Nakata's quest and Tamura's are linked, but the links are never clearly defined; indeed, it's not entirely clear how their two character arcs are connected at all, though they may be the same person.

If this review fails to convey much sense of the plot, it's because Murakami's plots are... really hard to describe. He throws a little bit of everything into the story. And lots of penis. But the prose is liquid and lyrical, even in translation, and the story carries you along like a rushing stream, batting you about so you're not quite sure where you are going but you at least have a vague sense that you are going somewhere. And where it dumps you, who can say?

I liked it. But it's weird. Like everything Murakami writes. And seriously, dude, enough with the penises.
Tweet