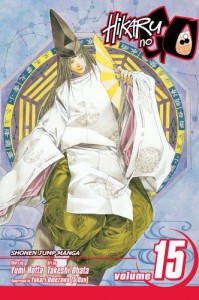 So, there was one thing I liked in this otherwise kind of flat volume, which is that the author is doing "something" with Fujiwara no Sai, and it promises to lead to some character development for Hikaru.

The thing is, Hikaru no Go is basically a cross between a bildungsroman and a typical adolescent boy power-up progression series - play a game, get better, play a tougher opponent, get better still, and so on, taking on successively tougher "bosses." What makes the series better and more sophisticated that DragonBall-Z or Pokemon is that it's set in the real world with real-world contests, and the best sequences have been when the author, Yumi Hotta, manages to convey all the tension that actual go players feel over a board, where every single stone is life and death, and character really is displayed on the board.

There wasn't much of that in this volume, because Hotta finally addresses the supernatural elephant in the room: Hikaru has been haunted from the beginning by the ghost of a Heian nobleman and go master. Aside from Fujiwara no Sai, the series has been basically free of fantasy elements, which makes sense, though it leaves Sai as basically a plot device who doesn't really fit now that Hikaru no longer needs a ghostly tutor to nudge him into playing and improving.

So, in this volume Sai disappears. And Hikaru freaks out, and goes looking for him, searching out what were supposedly his old (corporeal) haunts in Hiroshima. This volume is more road trip than go contest, though we finally get some interaction between Hikaru and Akira Toya.

It will be interesting to see whether Hotta has really written Sai out of the series entirely, or if the ghost will be back. Also to see what effect this has on Hikaru. However, the immediate effect, that Hikaru goes totally emo, bawls his head off, and decides to quit playing go, had me going, "Huh?" I mean, it's great that the kid finally learns a lesson about taking other people for granted - he's been a real jerk to everyone, especially Sai, though no more so than most teenagers. But considering how he treated Sai more as a pest and/or a pet than a friend, his sudden overwhelming depression when Sai vanishes did not ring true.

Anyway, I guess it does make a convenient excuse to delay the Hikaru/Akira showdown a while longer, but dang, let's bring some tense go games back into the plot.
Tweet