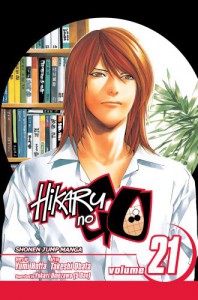 Meh, pretty much a "filler" volume as the players gear up for the Japan-Korea-China Junior Tournament. The only go game of note was Ochi hoisting himself on his own petard to prove himself, thus making the Japanese team Akira Toya, Hikaru Shindo, and Kiyoharu Yashiro.

A bit of tension is rather artificially added to the scenario with a Japanese reporter's interview of Korean go professional Ko Yong Ha. Thanks to an inadequate translator, Hikaru hears that Ko Yong Ha insulted Honin'bo Shusaku (the legendary go player who was tutored by Fujiwara-no-Sai, before Sai came to haunt Hikaru). So now Hikaru feels a need to beat Ko as a matter of personal and national pride.

There really wasn't a lot else to this installment; it's just a prelude to the climax of the series.
Tweet