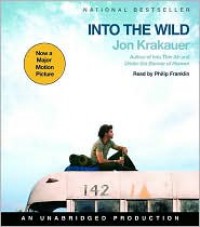 In 1992, a privileged twenty-two-year-old slacker white dude Tyler Durden-wannabe with a head full of Jack London, Tolstoy, and Thoreau gave away his college fund and went on a walkabout beginning in California and ending in Alaska, where he died of starvation. And it was all basically to give the finger to his stupid parents dumb stupid parents what do they know I'll show them don't need no stupid parents....

Okay, that's kind of mean. But while he certainly didn't deserve to die, especially not a lingering death of starvation and (hypothesized by Krakauer) poisoning, it was hard to feel sorry for Chris McCandless, a young man who had pretty much been handed everything in his life and rejected it all to go prove he was a rugged individualist who didn't need no government or parents or nobody.

In fairness, he was just behaving like a typical young man. He was at the right age to be working out the tail-end of his youthful rebellion phase and asserting himself, and Krakauer himself makes the point that he was just reenacting for himself the ancient manhood trials that have been rites in most societies throughout history. McCandless decided to do it by hiking his unprepared ass into Alaska and living off the land, ignoring all the good advice he received from people who told him this was a bad idea.

That said, he actually did pretty well for himself, and as Krakauer retraces his life, his route, and how he met his end, the kid doesn't seem as dumb or unprepared as he's been made out to be. He wasn't really ready for the challenges he had taken on, but other people have managed to survive with less preparation and less equipment under equally harsh circumstances. Basically, McCandless made a few critical mistakes, any of which might have been survivable, but the cumulative effect probably doomed him.

Although McCandless's tale is interesting and sad, there isn't really that much to tell, so Krakauer pads out the book with stories about a few of the other people he met who had crossed paths with Chris while writing this biography - there are all kinds of interesting folks "living off the grid" or doing the perpetual road trip thing - and a few other Alaskan expeditions gone wrong. I enjoyed Krakauer's Under the Banner of Heaven, which like Into the Wild linked a single incident to a much broader historical topic, but in this case, the incident and the topic, while interesting, didn't provide enough material for a longer book. A good read and compelling at times, but mostly you just end up shaking your head and feeling sorry for McCandless's family, and wondering if McCandless would have returned from his Alaskan adventure and settled down into a regular job and made peace with his folks, had he survived.
Tweet