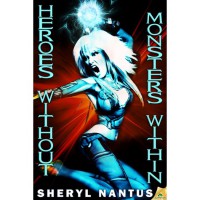 Heroes Without, Monsters Within is a sequel to Blaze of Glory. It's a small-press ebook that sort of the straddles the boundary between "superhero novel" and "romance," mostly falling on the superhero side of the line, but Sheryl Nantus evidently writes mostly schmexxy romances for a female audience for Samhain, and it shows with all of the main character's wayward thoughts about the male protag's tight pants and T-shirts, plus the extended lathery shower scene following the superhero showdown.

Though my attention drifted during Jo "Surf" Tanis's romantic interludes, those were fairly brief and the superhero action was interesting enough to keep me reading.

In the previous book, we learned that all supers worldwide had been secretly controlled by the sinister Agency, which staged superhero/supervillain fights for the public while threatening them all with death by exploding head thanks to bombs implanted in all their skulls. Yeah, it doesn't make a terrible lot of sense, but on the Superhero-Adjusted Feasibility Scale, it's far from the dumbest premise I've ever read. The alien invasion that happened in the last book is referred to but, much like those Marvel and DC comics where an alien invasion fleet threatens the entire planet in a worldwide crisis requiring every superhuman on Earth to team up and fight an extended battle to save the world, after which everyone goes back to working their 9-to-5s while holding down a secret identity like nothing ever happened, the world at large in Heroes Without, Monsters Within shows no sign of being changed by the revelation that superpowered aliens might drop by Earth now and then for a bit of world conquest.

Instead, Jo and her team are trying to protect the public from rogue supers now that they are off the Agency's leash. The main plot is a former "supervillain" who has now gone bad for real. A B-lister under the old regime, he can create earthquakes and has decided on Dumb Supervillain Plan #3: Blackmail the UN for 50 billion dollars. Of course he has a partner, so the first fight between the Protectors and the villains, in Las Vegas, goes badly. The rest of the book is Jo and her team making a plan for the rematch, luring the bad guys to their second encounter, and of course, a climactic final battle with things not going precisely according to plan and the real master villain escaping for the next sequel.

It's somewhat formulaic, but if you like superheroes then you are used to formulaic. Nantus's writing is brisk and playful, sometimes a little too self-indulgent in the manner of many former fan-ficcers, but the main character is particularly appealing, as Jo is just full of positive and negative character traits, a tough chick who screws up, has second thoughts, is kind of hot but gets banged up a lot (no, not that way!) and generally lives up to her heroic role. Not Mary Sueish in the least and pretty likable. I think what I liked most about this book is that the "Protectors" are not the Justice League or the Avengers - they're a bunch of second-stringers operating out of a bookstore in Toronto, and somehow they wind up being the world's preeminent (read: only) superhero team. (For "the world" read: North America.) It's all a bit absurd but Nantus pulls it off without descending into pure silliness. So, if you like superhero books, these deserve a read, and if you don't, these won't change your mind.

3.5 stars, as the character development and plotting was improved from the first book, and a good faith "whatever floats your boat" rating with regards to the fanservice shower scenes.
Tweet