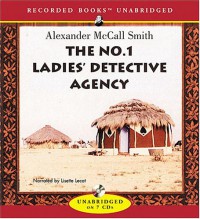 I had heard of this series, and in the mood for a light mystery and fond of those that use settings that most American readers aren't familiar with, I gave the first book a try. I was pleasantly surprised by the combination of warmth and seriousness that Alexandra McCall Smith brought to his stories about Mma "Precious" Ramotswe.

Precious decides to go into business as a private detective after her no-good abusive husband leaves her. Mens' violence against women and the extreme sexism of African culture is a common thread running through the book, which, while probably realistic, made me a little suspicious of yet another white guy writing about how badly those non-white people in some other country treat their women. However, I didn't feel that Smith was being patronizing in his depiction of Botswanan culture. Precious is proud of being African, and while she has something of a chip on her shoulder when it comes to men (not without justification), she's a very humane and very sharp person, with friends who are men and women alike.

This book isn't really a full-length novel, more of a series of short stories and vignettes about Precious, her life before and after starting her detective agency, and life in Botswana.

Men frequently ask Precious, "Who ever heard of a female detective?" to which she retorts "Haven't you ever heard of Agatha Christie?" Most of her first cases are not exactly the sort you'd see Miss Marple taking on. Women who suspect their husbands of cheating (which, according to Precious, all men do), a strict father who believes his teenage daughter is running around town with a boyfriend, and an old doctor friend of hers who needs to find out what's going on with one of his colleagues. However, Precious slowly starts brushing up against more serious criminals, and a witch doctor who might be responsible for abducting and killing a child, and who has ties to some very powerful men.

Some of the short pieces are funny, some are beautiful in their description of Botswana and the land and people whom Precious loves so much, and some are sad. This isn't a "cozy" — besides cheating husbands, lazy con men, and the Case of the Disobedient Teenager, there is also rape, racism, poverty, and corruption. But it's a charming and likable book that's mostly optimistic despite the bitter parts. I don't know that I'm in love enough to go read the entire series, but I can certainly see myself picking up more volumes when I want some light reading. 3.5 stars.
Tweet