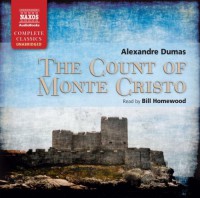 One of those books which you really should read the original, even though everyone knows the story from countless movie versions, etc. It's probably the best story of injustice and revenge ever told.

Okay, really it's a first read, since I only read the unabridged version as a child.


Mon dieu! This was 53 hours as an audiobook, guys! I listened to the unabridged version of The Count of Monte Cristo in my car, and my commute isn't that long, so it took about two months.

Don't make fun of Dickens' wordiness until you've read Dumas. He is wordy as heck and makes up a hundred little side-stories and indulges the reader who wants to know the final fate of every single minor character. But if you want to dive into a big thick juicy scheming revenge novel with a moral at the end, The Count of Monte Cristo is full of more adventure and spectacle than Dickens would ever deign to write. (Though Anthony Trollope's The Way We Live Now did for greedy scurrilous English bankers and hoity-toits what Dumas does for the French.)

So, you probably know the bones of the story, because Edmund Dantes is the original Batman. No, his parents aren't murdered in front of his eyes, but two "friends" set him up as a traitor by sending an anonymous letter accusing him of being a Bonapartiste. (19th century French politics play a role here, as the first part of the novel is set during the period when Napoleon was confined to the isle of Elba, and then staged a dramatic return during which he briefly tried to regain the throne.) One of his friends wants his job, the other wants his girl, and Dante has the misfortune to go before a public prosecutor named Villefort, who initially wants to let Dantes go, realizing he's just a poor sap who was set up. However, when it turns out that Dantes unknowingly possesses evidence that Villefort's own father is a Bonapartiste, he instead consigns the hapless sailor to imprisonment in the Château d'If, an island prison off the coast of Marseilles. There, Dantes spends the next fourteen years, during which time he meets another prisoner, a "mad" priest who has been unsuccessfully trying to bribe his jailers to let him go with promises of a fantastic fortune he knows the location of.

To make a long story short, Dantes escapes, after having spent fourteen years learning all worldly knowledge from the Abbé Faria. He goes and finds the Abbé's fortune, an ancient Roman treasure, and soon reemerges in Europe as the mysterious Count of Monte Cristo. He's fantastically rich, an expert with all arms, poisons, and finance, he has Muslim servants and a beautiful Greek princess as his slave/ward, and he's buddies with Italian bandits and Mediterranean smugglers. He's a master of disguise and he has an indomitable will. This former sailor now moves as easily among French aristocracy as he does among Italian brigands. Everyone admires and fears him.

He spends years acting as an angel of mercy and vengeance, rewarding the deserving, while planning his revenge against the three men who sent him to the Château d'If. The plot is intricate and there are dozens of characters, some of whom wind up interacting in fantastically coincidental ways. Since Dantes has returned from prison as the Batman, of course all his former enemies, who were once just poor scrubs themselves, are now fabulously wealthy and powerful as well, the better for Monte Cristo to bring them down.

It's an exceptional story, and a classic adventure. Kids should love it, if you can find a kid with the patience to read almost half a million words of flowery 19th century prose. Adults should also love it. But it's definitely over the top with all its coincidences and larger-than-life characters. Over the top, but a literary masterpiece. You get revenge and adventure and justice and a view of European high and low society in the post-Napoleon era. What elevates it above simple adventure and melodrama, besides the fine storytelling? It's not just Dantes getting even with those who did him wrong (which is how most of the movie versions portray it). In the end, his enemies undo themselves, and the Count of Monte Cristo finally faces the question of whether what he did was right and whether it was all worth it. Like Batman, he's never really going to find peace.

This book is totally worth reading -- and don't wimp out with an abridged version. Read the great big whomping unabridged doorstopper. That said, I have to give it only 4 stars, because while it's a classic that deserves its place, I wanted to start a drinking game for every time Dumas describes an "indescribable" expression or someone expresses an "inexpressible" emotion.

I don't know what French words they were translated from, but Dumas's writing does get quite purple by modern standards. Where Dickens crafted prosey, clever wordiness, Dumas is just wordy. And all those sordid coincidences! And entire chapters on the origins of various bandits and smugglers and where the asexual lesbian niece runs off to. And let's face it, an uneducated sailor spends fourteen years in prison and comes out as Batman? Come on now, guys. But it's still awesome.
Tweet