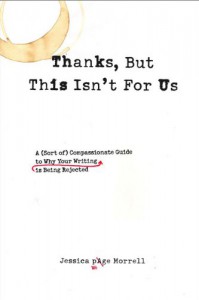 So, I have a confession to make to all my Goodreads peeps: I have written a book.

It's in the final revision stage. I've joined a few online critique groups and have had a few people read the entire manuscript and I've gotten generally positive feedback. (As in, "I think this is good enough to be published" feedback.) Only from casual readers and fellow aspiring writers, not from agents or publishers, alas, but at least what I have always believed about myself - that I'm a pretty decent writer - has been confirmed by a few people who are not my mother or my high school English teacher.

But, I haven't been published. Well, technically I have, if you count my freelance writing for Steve Jackson Games. (Sigh. In Nomine. That poor orphaned, mishandled RPG.) But I have yet to be the published author of a novel. So of course as I prepare for the query and submission stage where my dream of becoming a Real Author will probably meet reality the way a bug meets a windshield, I have been reading a fair amount of writing books, hanging out on writers' forums, etc. I've gotten pretty good at critiquing myself, though the victimssubjects of my critique don't always appreciate it. Be warned: online critique groups are mostly made up of sane and reasonable people with thick skins and a realistic assessment of their own writing abilities, but there are a fair few special snowflakes who will go batshit when you tell them their baby is ugly.

I am giving Thanks, But This Isn't For Us only 3 stars, not because it's not a pretty good book of writing advice, but because for me, it didn't really tell me anything new. I think it's a good book for the new writer, the writer who has yet to face the flames of impartial criticism, the writer who is just venturing into the idea of getting published. Jessica Morrell goes through all the basics: how to write dynamic stories, avoiding infodumps, melodrama, purple prose, dialog disasters, wimpy protagonists, making characters interesting yet sympathetic yet larger than life yet believable, etc. She gives many examples of "dealbreakers" that have made her, as a freelance editor, beat her head on the desk over the years.

Now, one thing that might bug the artsy MFA types (though they probably don't need this book and won't read it) is that this is primarily a book about writing marketable fiction (or memoir, a category Morrell devotes some time to, in trying to explain to aspiring memoirists why their disappointing childhood in the 'burbs might not be such a compelling tearjerker to other people who are not the author). It's not about writing literary fiction per se (and she barely touches on non-fiction). So most of her advice ranges from addressing the mechanics to addressing issues that will make agents and editors pass on a manuscript. This of course gives wannabe writers plenty of excuses to say "Oh, she's not talking to me! I like to play with the rules! I am writing highly literary/experimental fiction!" Or "But (Famous Big-Name Author) does that, so what do you mean it makes you roll your eyes?"

Again, this book isn't about finding your voice, walking your writerly path, dancing with your muse, unleashing your left-brained inner child and writing the Great American Novel. You may do all that along the way, but this book is about crafting a salable product, which means, among other things, being familiar with the conventions of contemporary fiction and giving readers what they want to read (and more importantly, what they are willing to pay for). If you are the next Cormac McCarthy or Mark Z. Danielewski, you can toss this book and let your muse do a few lines and then start writing. But most mortals have to convince someone their shit can sell. (So did McCarthy and Danielewski, they just didn't need to convince anyone they needed punctuation.)

Morrell gets to rant to us in a way she can't rant to her clients, who pay her to try to whip crap manuscripts into shape. She does so (sort of) compassionately, because you can tell she desperately wants writers to get the reasons why they are receiving rejections. Most of what she talks about though, could be picked up in a good writing class or from hanging out on Absolute Write. She's addressing the writers who haven't done the work yet of learning what makes writing not suck.

It's always comforting to read about the incoherent crap other people write and tell yourself "Well, I'm sure glad I don't write like that!"

But honestly, I am at the stage now where I am confident that I have the mechanics, not just of writing technically competent prose, but a technically competent story, pretty well under control. That does not mean I'm good enough to be published. Lots of people can write a book that has all the basic ingredients of Story written in a competent manner. Admittedly, from what I've read from agents' and editors' blogs, even accomplishing that much will put you ahead of about 95% of the other stuff in the slush pile, but that remaining 5% is still an awful lot of competition. Does my writing really have the spark, the hook, the pace, the characterization, the creativity, the shine, that will actually make people want to buy my book? I dunno. But those qualities are a bit more ineffable than "Learn how to punctuate dialog" and "Maintain a consistent POV," or even "Make sure your scenes are all doing something important and are organized appropriately."

Anyway, for a young writer, for a raw writer, for the writer we all know who's either a teenager or someone who's "always wanted to write a book" but hasn't actually written anything substantial since they graduated college years and years ago, Thanks, But This Isn't For Us would be a good book to hand them about the time they have completed their first draft (and before they ask you to read it). It's a good primer on writing publishable fiction, and might help a newbie build up the tough hide they'll need before someone who doesn't care about hurting their feelings reads their work.

I don't think there is much more I can get out of "how to write" books written at this level. I am sure some outstanding authors have written books about their own process that may flip a switch or two for me, and there is plenty I can still learn from critiques of my work and reading others' work. But mostly, I think if you've got the chops, you become a better writer by writing... and of course, reading. A lot.

And if I do get published, I promise not to pester all my Goodreads friends to read my book. :D
Tweet