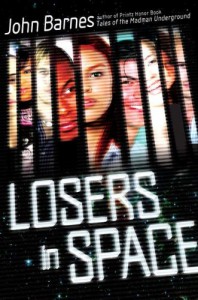 You can almost feel the premise of this book and the story John Barnes wanted to tell crashing against current market forces. He's written a hard SF "teens in space" YA novel with echoes of Heinlein, and today, it's estimated that somewhere around 80% of YA readers are girls. I am not saying girls can't read hard SF! Indeed, it would be great if more of them did, and clearly Barnes is trying to encourage more young readers to embrace the geeky science stuff. But the truth is, most girls don't read hard SF, so Losers in Space is competing with hot magical boyfriends for a mostly female audience. Even though the protagonist is a girl and there is a fair amount of sex (and all of it straightforward "Yes, they are teenagers, trapped on a spaceship, what do you think they're going to do?"), there is not much romance.

So I'm not surprised I haven't seen a lot of buzz for this book, even though John Barnes is a veteran author. The fact is, Losers In Space is one of the best YA novels I've read in a long time. Of course my biases are obvious: not only do I love "teens in space" stories, but the novel I am working on is one. (Yeah, we are all recycling Heinlein.)

Losers in Space is set in post-scarcity society, and initially, it seems like a utopia. PermaPaxParity guarantees everyone on Earth a basic standard of living that is luxurious by early 21st century standards, and people pretty much do whatever job they want to do, or no job at all if they just want to sit on their asses all day. You can be an astronaut or a schoolteacher or an engineer or an artist or a doctor or whatever else you can qualify for, but you'll be paid pretty much the same.

But since it's no longer legal to inherit wealth, the only way to become rich - really, really rich - is to become famous. The nine teenagers who are our "Losers in space" are all the children of rich celebrities. They very much want to become rich and famous themselves, but they're competing with a planetful of aspiring celebrities. So one of them comes up with the brilliant idea of stowing away on a ship heading for Mars, in a stunt that will make them all famous. And in the PermaPaxParity society, you can literally get away with murder if you are entertaining enough.

What makes this book great is that every one of our not-so-intrepid teenagers experiences character growth. The main character, Susan, starts out as an annoying Lindsay Lohan type, trying to get famous by providing mediagenic flashes of cleavage and crotch and hooking up with bad boys at drunken revels. We learn that until age 12, she was actually a geeky Science Girl, and then she hit puberty, discovered she liked boys and fame (not in that order)... and also her BFF, another geeky Science Girl, took a drug called Happistuff that is a sort of cross between Mad Cow Disease and Ecstasy: it causes progressive and irreversible brain damage while making the user unable to feel anything but happy. Susan's friend Fleeta, once as smart and curious as her, is now a bubbly bimbo whose every smile is a knife through her friend's heart.

Fleeta comes along for the ride, joining a cast of other stock teen archetypes who also grow and change over the course of the story. There's the geek, the jock, the bully, the New Agey dingbat, the misfit, the nice girl.... oh, and the sociopath. That would be Susan's boyfriend.

Their adventure is long and suspenseful, especially when we get to the inevitable betrayal by the sociopath, but it's a story full of humor and humanity and heartbreak, all the way through the epilogue.

Now, Barnes does one thing in this book that kind of irritated me and I'm knocking off half a star for it, and other readers seem to have knocked off more. Since he's writing hard science fiction and he is really pushing the "science" part, he fills it with explicit infodumps. He does this in an ingenuous way, by making them skippable "Notes for the Interested" running in sidebars, in which he explains the physics of space travel, astronomical details, and information about the world of 2129. You really could skip them and still follow the story, but of course I read them all, but found them to sometimes be an annoying interruption in the narrative. It was an interesting idea, but I prefer when authors just skip the infodumping entirely. Tell us what we need to know for the story, don't overdo the "Science is soooo cool!" aspect.

Nonetheless, this was a fantastic and believable story and I was really attached to Susan and her friends. Especially Fwuffy.

4.5 stars, must-read for any fans of Heinlein juveniles or other teens in space stories.
Tweet