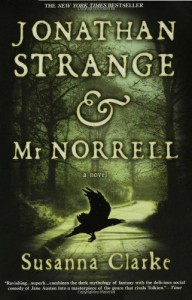 I wasn't sure I was going to love this book, despite it being a much-praised fantasy novel with a premise different from the usual doorstopper epic fantasy, and much closer to Harry Potter (which I love). But once I started reading it, it was a page-turner, often keeping me up late to finish just one more chapter. Susanna Clarke is not quite convincing in her imitation of a 19th century British novelist -- a few of the plot flourishes were just a little too modern -- but she comes pretty close, and it's astounding that this was her debut novel.

Jonathan Strange & Mr Norrell is about two eponymous magicians dedicated to bringing back English magic. The book slowly immerses us in this alternate history in which magic has always been real, but for the past few centuries it has all but died and is now regarded mostly as a quaint historical curiosity. On the surface, it's now the Regency England we know from history, until Mr Norrell comes to London to revive magic. Soon he has a protege, Jonathan Strange, who is much bolder and more proactive than Mr Norrell, and who takes an active part in Wellington's campaign against Napoleon.

But this isn't primarily a historical fantasy, though it may seem like it at first. It's not like Naomi Novik's Temeraire series (Napoleonic wars + dragons). This England is much more different than it seems, and there is more magic than its inhabitants dream, but despite the magic and the grand scope, the story has more in common with the Regency novels Clarke is imitating. It's a romance (in the traditional sense of the word) and it's about relationships -- primarily the relationship between Mr Strange and Mr Norrell, which eventually eclipses even the marriages and other romantic attachments in the book. Clarke brings in a large cast of characters, which is traditional both for epic fantasies and for Regency novels, but spends a lot of time developing each character, which is more traditional with the latter than with the former. On the other hand, she does a lot of worldbuilding, yet makes it all interesting, primarily by means of footnotes (traditional in form but modern in function for this book). Clarke's magic is carefully thought out, but it's wild and fathomless, and her faeries (around whom much of the plot revolves) are equally capricious and powerful and limited at the same time.

Despite being such a thick book, it just flies by. I would definitely recommend reading a print copy rather than an audio version (which is how I "read" many of my books), since I'm not sure all the footnotes have quite the same effect when delivered in an audiobook, and you'll also miss the black and white charcoal illustrations which decorate the book (the hardcover and trade paperbacks, at least).

This is definitely a fantasy-lover's fantasy, but it's also made my list of books I'd give to a non-fantasy reader if I wanted to entice them into the genre. Anyone who enjoys British literature of any kind should love this book. Best of all, it's a big thick fantasy novel with a decisive ending! That is so rare nowadays! I suppose Clarke could write a sequel (and I'd read it), but I'd much prefer to think she's working on something entirely new (which I will also read).

My highest recommendation. Okay, since I hate to uncritically fanboy anything, I have to say the book isn't perfect. There is a certain looseness to some of the story threads, a certain arbitrariness in how some of them are resolved, but that's also in keeping with the style of Regency novels, which were similarly imperfect. (If anything, the degree to which Clarke does wrap everything up more or less neatly is a sign of its modernity -- I've found Austen and Bronte novels to be far more untidy.) And as I mentioned above, Jonathan Strange & Mr Norrell is a 21st century novel written by an author pretending to be a 19th century novelist, and now and then you can see the woman behind the curtain. But these small defects never diminished my enjoyment of the book. It's really just a lovely, fun, enchanting, and touching book, and no author has any business writing a first novel that's this good.
Tweet