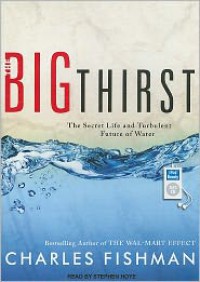 Books about environmental and economic issues are always kind of depressing, because it's really easy to show examples of how very badly we are screwing ourselves over on an epic scale. Like most authors of such books, Charles Fishman shows us how very, very bad it's getting and then tries to end on an optimistic note: "Hey, we have the technology and the science, and if we just behave like rational adults who know we're all in this together, we can solve this problem!"

Uh huh, how often does that happen?

Some interesting points to ponder:

2. Every drop of water you drink was once dinosaur piss. Probably millions of times over.

3. It's been shown repeatedly that people given access to relatively unlimited, cheap water use less water than people whose water supply is sporadic and uncertain, because people who can't count on their water supply tend to horde water, which leads to more wastage.

4. There are potentially oceans-full of "deep water" locked in the Earth's crust, miles down. Unfortunately, no technology currently known to us would make it possible to access it.

There are a lot of other interesting not-so-random facts in this book. But The Big Thirst is about water, and water management, and the economics of water. Basically, we have too many people and not enough water. Except that's not precisely true — we have enough water. We just don't distribute it or manage it wisely. Fishman talks about the extraordinary growth of water technology in the 20th century - how something we now take for granted (in the U.S.), that when you turn on the tap, safe, unlimited, practically free drinking water will come out, is a tectonic shift in culture. People used to have to spend hours every day just to haul enough water to live on. About half the world still does (and this burden mostly falls on women, with many long-term secondary consequences).

Fishman examines three main "case studies" — Las Vegas, Australia, and India. Las Vegas, of course, is a city built in the middle of a desert where people come and pay hundreds of dollars a night to sleep in hotel rooms overlooking enormous water fountains. Vegas's water supply from Lake Mead has been getting sparser and sparser. In response, they have made a number of very intelligent water choices and imposed restrictions that would seem insane in much of the U.S., yet Vegas residents have shown it's perfectly possible to live comfortably under a water-conservation regime. And yet, they still irrigate luxury golf courses in a desert. And yet, they still use (and waste) less water than farmers.

Australia is also suffering from years and years of drought, which does not look to be ending any time soon unless you believe the global warming denialists. One of Australia's major crops is rice. Yes, Australians raise rice - a very water-intensive crop - in the desert. Seems like madness, but it made perfect sense when rain was plentiful and rivers were flowing. Now there are rivers that have literally dried up, and if you do believe in climate change, then they are probably not coming back in our lifetimes. There is a certain futility in the attitude of the rice farmers whose "solution" is basically to hope the rains come again.

There's also an interesting story about a town that could have solved its water shortage problems easily by using waste-water — very clean and efficient sewage treatment plants — except the residents went nuts at the idea of drinking "sewer water" (even though, see above, every drop of water you drink has been piss many, many times for millions of years). More and more cities are in fact now using waste-water and desalinization to provide much of their water. (Desalinization, unfortunately, is not a magical process that turns seawater into drinking water with merely an investment in a plant. It has a massive energy cost — in other words, it's likely to increase global warming — and all that salt you extract has to go somewhere.)

Then there is India. Where even rich people tend to have erratic public water and supply themselves through inefficient, wasteful, technically illegal jury-rigged supply lines filled by private water trucks. Where millions of girls basically can't go to school because they are too busy fetching water for their families. (And because they have no toilets at school that any human being would want to use.) India also has massive water problems, but ironically, they are worse now than they were in the 70s, because what was once a fairly workable public water system has been allowed to fall apart.

So, all these problems, which are in fact solvable, but they are solvable through a combination of technological, economic, and social means which will require people act like responsible adults on a global scale. Although Fishman makes the point several times that even if the residents of California suddenly implemented heroic water-saving measures, it wouldn't do a thing for the water needs of people in India or Australia.

We are really foolish about water, and water is going to become a more pressing problem than oil in the next fifty years in some parts of the world.

An interesting if somewhat gloomy book (unless you're a really optimistic futurist). I thought Fishman belabored some points a bit, and was a little too trusting in the magic of "the market" to solve our water problems if applied correctly, but the basic point that people don't value something they get for nothing has been born out.
Tweet