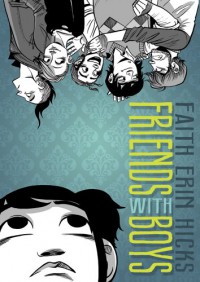 Maggie is a fourteen-year-old girl who was homeschooled, like her three brothers, until her mother abandoned the family and took off. Now Maggie (whose father is the police chief) has to go to high school for the first time. Besides dealing with the usual trials of being the new kid at school, she's also haunted.

This graphic novel is mostly a sweet family + high school drama (Maggie needs to find herself, she's got issues with her mother having left, her brothers have friends and nemeses at high school and she is inevitably drawn into one circle and into conflict with another, etc.) The ghost is an interesting plot device because while technically it makes this story a "fantasy," the ghost doesn't actually do anything. She just appears now and then, never saying anything, bothering Maggie with her presence. The plot that ends the story, in which Maggie engages in a misguided quest to "lay to rest" the ghost, just activates more family and teen relationship drama, which seems to be the point. The ghost is a metaphor - alternately, for Maggie's vanished mother, for her search for herself, for unanswered questions that won't necessarily ever be answered, for guilt, for all the things you cannot put to rest. You could assume that Maggie is only imagining the ghost and it wouldn't change the story, really.

As a story, only 3 stars, though I am fond of these kinds of bittersweet bildungsromans about a gentler and friendlier adolescence than I had, but I also really like Faith Erin Hicks's crisp black and white art, which conveyed emotions and gestures and expressions very cleanly, along with action. I have been a fan of Hicks since her web comic Demonology 101, and I'm pleased to see her having professional success.
Tweet