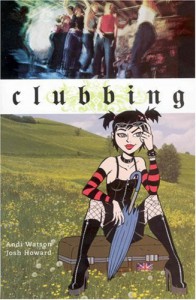 I picked this up on a whim at the library - maybe I missed having a thing for goth chicks when I was a teenager. Anyway, Clubbing was one of DC Comics' ill-fated Minx imprint, a line of alternative graphic novels targeted at girls, which got cancelled after a couple of years because their marketing sucked and the market for graphic novels in general (particularly girl-friendly ones) just wasn't that good.

The "clubbing" is a pun, as Charlotte "Lottie" Brook is a spoiled, privileged London teenager used to going out clubbing with fake IDs, until she's caught and gets sent to stay the summer with her grandparents at their golf country club in the country, where she tries to go hiking through cow pastures in $300 platform boots.

Lottie was amusing - of course she comes in with the cliched "snotty big city rich girl all prepared to look down at the bucolic yokels" attitude, but underneath her affectations and her privilege, she's not a bad girl, and she actually likes her grandparents (even while displaying the expected teen dismay at OMG having to hang out with grandparents!!!). She's smart but not very wise, makes dumb and believable mistakes for a teenager, she's kind of cute, and as it turns out, she has a wicked golf swing.

So, I would have liked this book a lot more if the sinister schemes Lottie imagined had stayed a product of her imagination and all the classic British literature she's read (she's a fan of the Brontes and Thomas Harding). It would have been funny if she was a modern-day Catherine Morland (from Jane Austen's Northanger Abbey), which is where I thought the author was going with the story. Unfortunately, nope, the story goes full Lovecraft at the end, which I thought was just dumb.

I don't how how much this book would appeal to the supposed target demographic, teenage girls. I guess they are supposed to identify with shopaholic Lottie and her overactive imagination and ten-inch waist, but it seemed like kind of an arbitrary way to lure girls into reading about shopping and boys and OMG it sucks being a teenager and then suddenly ELDRITCH HORRORS FROM BEYOND THE STARS!

And the execution of that twist was just... meh, considering who the real villain turns out to be, it broke my suspension of disbelief and my sympathy for all the characters. Still, mildly entertaining.
Tweet