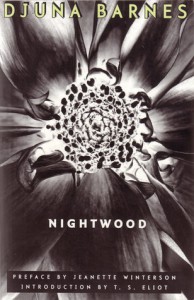 Nightwood is one of those literary books where the power is all in the prose, and you read it for the experience. Of plot there is very little, and the characters are grotesque sketches. Robin Vote is an American in Paris. She marries a Jew and self-styled "Baron" named Hedvig Folkbein, bears him a sickly child named Guido, and leaves them both abandoned and ruined when she runs off with another woman, Nora Flood. She and Nora enjoy a tumultuous, passionate and dissipated affair before Robin runs off to New York with yet another woman, Jenny Petherbridge, leaving Nora also heartbroken and destroyed. Even the relationship between Robin and Jenny does not end well.

This novel, written in 1936, is quite explicit about lesbian relationships. (By "explicit" I don't mean sexually — I mean there are no euphemisms or metaphors, it's right out in the open that these are chicks hooking up.) If you're eager for early 20th century LGBT lit, though, don't wade into Nightwood expecting a lesbian romance. Barnes' view of lesbians is hardly positive: "A man is another person — a woman is yourself." And considering that all these lesbians wind up broken and miserable, feelgood it is not.

Love becomes the deposit of the heart, analogous in all degrees to the "findings" in a tomb. As in one will be charted the taken place of the body, the raiment, the utensils necessary to its other life, so in the heart of the lover will be traced, as indelible shadow, that which he loves. In Nora's heart lay the fossil of Robin, intaglio of her identity, and about it for its maintenance ran Nora's blood. Thus the body of Nora could never be unloved, corrupt or put away. Robin was now beyond timely changes, except in the blood that animated her. That she could be spilled of this fixed the walking image of Robin in appalling apprehension on Nora's mind — Robin alone, crossing streets, in danger. Her mind became so transfixed that by the agency of her fear, Robin seemed enormous and polarized, all catastrophes ran toward her, the magnetized predicament; and crying out, Nora would wake from sleep, going back through the tide of dreams into which her anxiety had thrown her, taking the body of Robin down with her into it, as the ground things take the corpse, with minute persistence, down into the earth, leaving a pattern of it on the grass, as if they stitched as they descended.

Barnes' poetic style is the featured attraction, and that you have to experience. T.S. Eliot in the foreword says "only sensibilities trained on poetry can wholly appreciate it," and that's probably true, because I didn't appreciate it so much as endure it. Jeanette Winterson says: "Nightwood is itself. It is its own created world, exotic and strange, and reading it is like drinking wine with a pearl dissolving in the glass. You have taken in more than you know, and it will go on doing its work. From now on, a part of you is pearl-lined."

Well, I don't know about that either. But there were passages of pure genius and imagery. I particularly like the introduction of Jenny Petherbridge:

She had a beaked head and the body, small, feeble, and ferocious, that somehow made one associate her with Judy; they did not go together. Only severed could any part of her have been called "right." There was a trembling ardour in her wrists and fingers as if she were suffering from some elaborate denial. She looked old, yet expectant of age; she seemed to be steaming in the vapours of someone else about to die; still she gave off an odour to the mind (for there are purely mental smells that have no reality) of a woman about to be accouchée. Her body suffered from its fare, laughter and crumbs, abuse and indulgence. But put out a hand to touch her, and her head moved perceptibly with the broken arc of two instincts, recoil and advance, so that the head rocked timidly and aggressively at the same moment, giving her a slightly shuddering and expectant rhythm.

She writhed under the necessity of being unable to wear anything becoming, being one of those panicky little women who, no matter what they put on, look like a child under penance.

Barnes was a genius and a poet. But the prose is dense and unstopping and sometimes paragraphs take two or three reads and my eyes would not come unglazed. I am not one of those people T.S. Eliot described, with "sensibilities trained on poetry." Nightwood was not an easy read, and to be quite honest, I forced myself through it because it's pretty short, at only 200 pages. If it had been a longer book, I probably would have bailed at 50 pages and said "I can't take any more of this." It's all dark and brooding wailing and gnashing of teeth. Worst of all are the monologues by Dr. O'Connor, a dissolute gynecologist who likes to wear women's clothing.

"Have you," said the doctor, "ever thought of the peculiar polarity of times and times; and of sleep? Sleep the slain white bull? Well, I, Dr. Matthew-Mighty-grain-of-salt-Dante-O'Connor, will tell you how the day and the night are related by their division. The very constitution of twilight is a fabulous reconstruction of fear, fear bottom-out and wrong side up. Every day is thought upon and calculated, but the night is not premeditated. The Bible lies one way, but the night-gown the other. The night, "Beware of that dark door!"

"I used to think," Nora said, "that people just went to sleep, or if they did not go to sleep that they were themselves, but now" — she lit a cigarette and her hands trembled — "now I see that the night does something to a person's identity, even when they sleep."

"Ah!" exclaimed the doctor. "Let a man lay himself down in the Great Bed and his 'identity' is no longer his own, his 'trust' is not with him, and his 'willingness' is turned over and is of another permission. His distress is wild and anonymous. He sleeps in a Town of Darkness, member of the secret brotherhood. He neither knows himself nor his outriders; he berserks a fearful dimension and dismounts, miraculously, in bed!"

He goes on like that for pages. It's like modernist performance art, two characters barking poetically at the moon. This was one of those books where I could stare at the prose and realize yes, this author does things with words that are as far beyond my abilities as Tiger Woods is beyond my ability to play golf, and yet... oh gads, Matthew-Mighty-grain-of-salt-Dante-O'Connor, shut up. Also, all these people suck.

I didn't really enjoy this book, though I could appreciate the incredible talent and mad genius of Djuna Barnes. But any book this short that was still such a struggle to get through that I was relieved when it was finished, I can't give more than 2 stars.