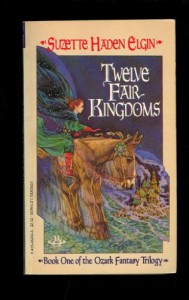 Suzette Haden Elgin's Ozark Trilogy is a strange beast of the kind published back in the cheap paperback era of the 80s, but which is far too odd and niche to be published today. It's a straightforward cross of science fiction and fantasy with both elements handwaved all to hell and gone by an author who's far more interested in worldbuilding and storytelling than worrying about whether anything makes sense.

The Planet Ozark was settled a thousand years ago by folks from the Ozarks who were so disgusted by the corruption and pollution and violence of Earth that they got on a starship, back in the year 2012, and took off for the first planet they could find that was Earthlike but far enough removed that no one would ever find them. The ship crashed in the ocean, but was rescued by enormous whale-like creatures (or so it is said in one of the Ozarkers' "Teaching Stories" - it is acknowledged that some of these thousand-year-old legends may be bending the cold bare truth a bit). The Ozarkers disembarked, and the founding Twelve Families formed twelve "kingdoms" (even though they don't have kings, or any other royalty) who are now scattered across Ozark's still-sparsely inhabited six continents and fiercely individualistic, to the point that even their token gesture of a centralized government, the Confederation of Ozark continents, is opposed by some. For a thousand years they have lived in occasionally quarrelsome peace, coexisting with at least three other rarely-seen sentient races on the planet.

Now, anyone with even the slightest taste for "hard" SF will see at least half a dozen things wrong in the premise above, and we haven't even gotten to the magic yet. But none of that matters — the story and the world is one that requires you to take it at face value, and if you do that, you'll be enchanted and richly entertained by this little gem of a sci-fi/fantasy. Follow the solemn Quest of Responsible of Brightwater, who is the kinda sorta ruler of the kinda sorta seat of power on the continent of Marktwain, the oldest and most developed of the six Ozark continents. After a series of magical mischief-making events aimed at disrupting the coming Jubilee, embarrassing Brightwater Kingdom, and undermining the Confederation itself, Responsible sets out to "show the flag" at each of the other eleven families' castles, engaging in battles of wit and elaborate courtesy (and occasionally magic) while trying not to reveal the greatest secret of all — that the planet Ozark is actually faced with an external threat.

Twelve Fair Kingdoms is richly imaginative, and the Ozark fantasy culture is particularly inventive yet authentic — Suzette Haden Elgin is an Ozarker herself. The customs, the culture, the names, and the magic (which comes in several varieties, from Common Sense and Household magic to Granny Magic to Hifalutin' Magic, on up to very serious Substitutions and Transfigurations) will give you a chuckle while also being laid out very logically within the paradigm Elgin creates.

Responsible is a fourteen-year-old girl who, living up to her name (Naming of girlbabies is Very Serious Business for the Grannies, who are a sort of shadow governing council on the planet) has the wisdom and maturity of adults four times her age, and magical power unrivaled by anyone else on the planet. If published today, this would make Twelve Fair Kingdoms a Young Adult novel and Responsible might be risking that dreaded "Mary Sue" label, but in fact we frequently see Responsible making blunders, losing her patience, and reaching her limits, though she still never quite acts like a typical fourteen-year-old.

The story is engaging all the way through, though there isn't any real resolution since this is the first book in a trilogy; uncovering the direct culprit of the mischief that originally sent Responsible on her Quest is a bit anticlimactic.

None of this makes it any less fun to read, and since this is a reread, I'm going to proceed straight through the rest of the trilogy. This is a book worth hunting down a used copy to enjoy, or you can get the new University of Arkansas reprint of the entire trilogy, with its awful and completely boring cover: Seriously, U of A, that's the best you could do to entice people to read an 80s fantasy classic? No wonder all of Elgin's books are out of print.
Tweet