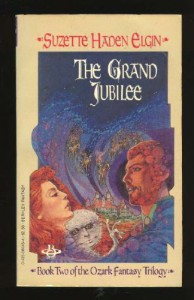 The second book in the trilogy, The Grand Jubilee, features that very event, which the first book was leading up to. Delegations from all Twelve Families arrive from across the planet of Ozark to attend the once-in-500-years Grand Jubilee, hosted by Castle Brightwater on the continent of Marktwain. Responsible of Brightwater, the 14-year-old prodigy who is secretly holding Ozarker society together, expects the dour, religious fanatic Traveller family to move to disband the Confederation of Continents, as they always do. She has worked out all the political angles and expects their bid to fail, as it always does.

But for the Grand Jubilee, many things happen that she could not foresee. First there is the handsome, caddish playboy Lewis Womack, literally her prophesied nemesis, though neither of them knows why. Their meeting turns into a hot and sweaty tumble in the sheets leaving both Responsible and Womack baffled and disturbed.

But then Responsible has to pay the price for a mistake she made in the previous book — blackmailed by a very mean Granny, she is forced to sit out a crucial meeting, and all the Ozarkers are blindsided by a truly unforeseen move.

This book contains a fair amount of political intrigue, and we learn more secrets of Ozark society. For example, we learn why it is so important for the Confederation of Continents not to be dissolved. And we learn that Responsible plays a very special role, which is why there is always a girl named Responsible. Indeed, the Womack family suffered its famous Curse because generations ago, a Womack Granny Improperly Named a girl Responsible.

Responsible's sister Troublesome, only briefly mentioned in the last book, appears briefly in this one, tears up the scene she's in, and then leaves.

Finally, Responsible finds herself pitted against the combined powers of all Ozark's Magicians of Rank, while the increasingly isolated Twelve Fair Kingdoms begin sliding into primitivism, superstition, and religious fanaticism.

This is still a marvelously imaginative book that stays just this side of silly. The physics and the magic don't bear too much thinking about. The gender politics are feminist in a sort of backwards way, as the Grannies teach girls that men are basically useless (with a rare few exceptions) and this is reinforced by the author, so basically all the real work of holding the world together is done by women, who accept it as their lot in life to comfort and coddle the menfolk and hide the terrible truth of their own ineptitude from them. Everyone stays in their rigidly assigned gender roles, and your choices as a woman are marriage to the least loathsome choice you can settle for, or eternal spinsterhood. It's a very odd evolution for a society with both magic and advanced technology and all the learning of Earth available to them; it has echoes of Sherri S. Tepper's The Gate to Women's Country. We're repeatedly shown that the Ozarkers are, in many ways, more civilized than any Earth culture ever was (violence is almost unknown and true evil is rare in the extreme; there is no massive accumulation of wealth, and no homelessness or starvation and little disease), and yet they're about as liberal as 18th century Calvinists.

The Grand Jubilee ends on something of a cliffhanger, as we can see the planet tipping on the precipice of disaster. So, will Responsible set all to right? And will her sister show up again? I am rooting for a reappearance of Troublesome!
Tweet