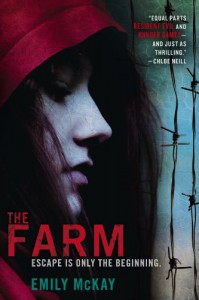 Fortunately, it was an eminently skimmable book, and that's how I read it, by skimming large chunks at a time.

So, generic somber-hued-ethereal-girl YA cover. Vampire apocalypse. Ninth grade crush shows up to rescue her. Yeaaaaah. The one single bright spot (or at least, point of interest) was the main character's autistic sister.

The main problem with The Farm, besides its elementary prose with vocabulary and sentence structures pitched at a sixth grade level, predictable plot with predictable Hot Boy and cartoonish vampires, and dead-dumb setting, is that McKay stuffs three or four major elements into a novel that can only handle one.

Flesh-eating monsters known as "Ticks" have mostly wiped out mankind, except for those few who remain in enclaves called Farms, which are actually more like concentration camps whose inhabitants are almost entirely teenagers. Teenagers are extra-tasty to the Ticks because of their hormones. Yeah, I'm not even sure what metaphor Emily McKay was going for there. They are separated into castes: "Greens," "Breeders," and "Collabs."

Lily, the main character, has an autistic twin sister named Mel. She and Mel are plotting to escape their Farm. Then her high school crush, Carter, shows up. The book then annoyingly alternates between first-person Lily chapters and third-person Carter chapters. Mel gets a few POV chapters as well. They escape from the Farm and find out that there are also real vampires. The suave, immortal, master-vampire with Dracula powers kind of vampire. Carter has teamed up with a vamp named Sebastian, and they're apparently part of some rebellion against the master vampire who's responsible for the Tick apocalypse. And they are looking for abductura, who are humans with a rare gene that gives them mind control powers, and they think Lily is one.

Are you going "Whaaaat?" at this point? Because I sure was.

Lily loves-hates Carter and they spend the book on the run or occasionally fighting Ticks, while Lily learns six impossible things before breakfast (vampires, abductura, Carter the super-hot popular boy has been in love with Lily the geeky nobody since ninth grade), and the book ends with a pretty predictable twist since this is of course the first book in a trilogy.

It's not horribly written, but it's written for the comprehension and attention-span engagement of the average, and I mean average, YA reader, meaning, it's pretty dumb. Frankly, I think it would have been a better book if McKay had dispensed with the vampires altogether. Justin Cronin already wrote this book and it was much better.

Mel was one of the few things I did like about The Farm. That said, I don't know how believable Mel is. Mel was interesting, but this is how her internal monologues go:

This rabbit hole feels cozy and we're not trapped even though Carter's still acting like Bugs. Uncle Rodney understands about music even if he worships a dead god.

I can try. I have all night to find the music. The pink gum helps.

The shark is gone — out tocking after Ticks. Finding food before it finds us. But part of me misses his watery silence. Who will pilot us, if we're not pilot fish to his shark?

Her stream-of-consciousness internal monologues were interesting, but made me think that McKay was modeling Mel after the Cylon Hybrids from Battlestar Galactica.

McKay also tries too hard by half to be clever:

Carter and I had gone to school together back in the Before. Despite what teen novels everywhere would have you believe, sitting beside a hot guy in ninth-grade biology is not the basis for eternal love — at least, not the requited kind. And yeah, I admit it, in my more romantic moments, I imagined that I alone saw through his tough, bad-boy exterior to the wounded soul inside. Carter had been the kind of guy who ran hot and cold. One day he'd be all charming smiles, the next brooding glares. Some days he'd flirt with me, others he'd ignore me completely. What can I say, that charming, bad-boy thing he had going was like catnip to a geeky girl like me. And yeah, my predictability disgusted even me. I'd spend the first two periods of every day reminding myself not to be an idiot — because a guy like Carter didn't even exist in the same social universe as I did — and I'd show up to class ready to banish my crush forever, only to have him flash me one of those crooked smiles that made me melt inside.

There's got to be a trope to describe trying so hard to subvert the thing you are mocking that your subversion turns into outright imitation. And yeah, elsewhere in the book, there's an explicit "Vampires don't sparkle" line. Also, because Lily learned archery in Girl Scouts, she picks up a bow to start shooting vampires with. Uh huh.

Lily is mostly annoying. She's your standard issue feisty-girl YA protagonist, with an extra side of thick-as-a-brick-stubborn-as-a-wall, because I lost count of how many times she'd stop Carter or someone else in the middle of a life-and-death flight from the bad guys to demand that they give her answers! Right! Now! Or she's Not Going Anywhere!

She does have a few genuine moments of self-awareness and character development. For example, when she works out that Carter may have fallen in love with her because she has mind control powers, she is freaked out and refuses to pursue their relationship further. (For a few chapters.) She also, with a little help from their vampire friend:

"Has it occurred to you, Lily," he continued — either unaware of my bone-deep revulsion or unconcerned with it — "that Mel is as much her own person as you are. Perhaps it is not anyone's fault but her own."

realizes that she's been pretty horrible to her sister.

All those months on the Farm, I had treated her like she was a burden. I had acted like some sort of saint for taking care of her. God, that must have irritated her. Suddenly I thought about how her speech patterns changed on the Farm. I had assumed it was stress, but maybe it wasn't. After all, she'd started talking again when Carter showed up. Carter, who'd always treated her like an equal. Maybe I really was the problem. Why had I always treated her like she was a burden, when we were really in this together the whole time?

So, I will give this book two stars for the small bits of redeeming value I gleaned from it. But it makes me die a little inside reading other reviews saying it was "So scary! And gory!" or "exciting" or "original" or had a "really interesting plot" since these are obviously readers who don't read much of anything outside of lowest common denominator YA pulp and have nothing really scary, gory, exciting, original, or interesting to compare it with.
Tweet