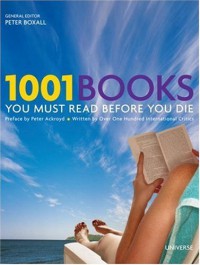 Peter Boxall and his panel of high-falutin' lit'ry types got together and made a list of 1001 books they think everyone should read before they die. Now the title might rub some folks the wrong way - hey, who are you, you high-falutin' lit'ry types, up in your academic towers, telling us what we must read? Ultimately this list is probably no better or worse than any other "best books" list compiled by literary scholars, though it's certainly longer than most. (I'd be amazed if any of Boxall's committee really has read every single one of these books.)

The merits of the books chosen are of course open to considerable debate. They range from the big classics that every single list ever includes (Madame Bovary, Crime and Punishment, Moby-Dick, etc.) to a handful of modern genre classics (Neuromancer, Interview with the Vampire, The Spy Who Came in from the Cold) to some really obscure ones I have never heard of, nor met anyone who's read them (The Clay Machine Gun? Giles Goat-Boy? Yeah, I see some of you on my friends list are making a liar out of me...)

There are two main criticisms people usually make of the list: one is that it's very Western-centric, with very few non-Western novels on the list, even going back to the 17th century. No Tale of Genji, no Water Margin, to say nothing of anything more modern.

The other flaw is that it's pretty obvious that some of the literary panelists just stuck as many books by their favorite author as they could on the list. I mean, I like Charles Dickens, but I don't think he needs to be on the list 10 times. He does not make up 1% of the world's most important literature all by himself! Philip Roth: 7, Virginia Woolf: 9, Jane Austen: 6, etc. I know it's probably hard to choose which of Jane Austen's six novels are the best/most important, but come on — I'd agree everyone should read at least one or two of her books, but not all of them, unless you actually like Jane Austen (which I do, incidentally).

So, anyway, I understand the revised 2010 edition has addressed this a bit, with fewer Dickens and more non-Western inclusions.

The summary of each book is brief and not always very illuminating. None of them really argue passionately for why this particular book (especially if it's only one of many by the same author) deserves to be on your literary life list. However, in a brief allotment of words, each book gets a page on its qualities and what it has to offer.

So, this is the sort of book that's interesting to have on your shelves and to page through. And I have been semi-randomly making my way through it, sometimes choosing books I would never otherwise have read. You can see my list here. Some have been delightful surprises, some were just an opportunity to read one of those books everyone is supposed to have read in high school but I never did (hence my finally getting around to Wuthering Heights and The Hitchhiker's Guide to the Galaxy), and some I do not think my life would have been diminished by missing.

I still haven't read Moby-Dick or The Great Gatsby yet.

Personally, I found Jane Smiley's 13 Ways of Looking at the Novel a more engaging and personal read, with her list of a 100 books which she personally read (or reread) for their importance. But 1001 Books You Must Read Before You Die is a hefty doorstopper worthy of any book-lover's collection, though I'd like to meet the person who's actually read all 1001. I seriously doubt I will get around to all of them.
Tweet