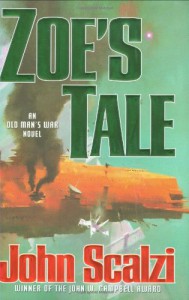 I haven't read any of Scalzi's other books, so I don't know the background of the Old Man's War series and thus read this as a stand-alone novel. I enjoyed it very much as a light SF novel, somewhat reminiscent of Heinlein's juveniles. The voice of the protagonist was engaging and funny and touching and mostly believable (although Scalzi does sometimes give his teen characters dialog that's just a little too clever).

That said, the story required an awful lot of suspension of disbelief. Roanoke never really felt like an alien planet, and for that matter, the aliens were often not alien enough. (Although only a few aliens even get descriptions; one of the important alien characters later in the story could be humanoid or a giant squid for all the description we get.) I could list a whole bunch of other plot holes, large and small, but several reviewers have done this already. This is not a tightly plotted, intricately worked out novel -- it's space opera. It's fun, but it's not a universe I'm really drawn to read more about.
Tweet