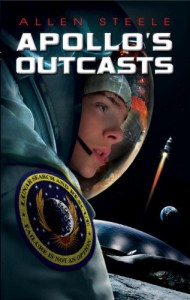 Ah, this is more like it. For those of you who miss those Heinlein juveniles, Apollo's Outcasts is perfectly billed as a successor to books like Starman Jones and Have Space Suit -- Will Travel. And look, is it too much to ask for some boy-centered YA now and then? This was a great juvenile hard SF novel, updated for the times.

Jamey Barlowe was born on the moon, but brought back to Earth after his mother died. Thanks to Lunar Birth Deficiency Syndrome, his bones aren't strong enough to hold his weight in Earth's gravity, so he's spent his life in a mobil, a kind of high-tech wheelchair. His father is a scientist for the International Space Consortium, a multinational space agency that has replaced NASA in this world of the late 21st century. When the President of the United States dies under suspicious circumstances, his Vice President, a right-wing fanatic named Lina Shapar who has what one might suspect to be more than a passing resemblance to certain real-life politicians

seizes control in what is effectively a coup d'etat. She starts throwing her political enemies — including Jamey's father, who had not long before, along with many other scientists, signed a letter opposing her — in jail.

Having seen this coming, Jamey's father packs him and his sisters into a transport to the Moon, where they can (he hopes) hide on Apollo, the ISC moon colony that mines helium-3 for Earth's fusion power plants.

This is a very traditional YA SF story. "Heinleinesque" cannot be said too often. If you liked those old Heinlein juveniles, you will like this book. If they do nothing for you, then you probably will find Apollo's Outcasts falls flat for you too, because it's a boy's adventure on the moon, with plenty of science and just enough politics and economics to make it vaguely plausible.

Advantage Heinlein: He was Heinlein, and a damn good writer when he wasn't writing batshit crazy wankery in a state of terminal fever. Allen Steele is a good writer, but he's no Heinlein.

Advantage Steele: This book was written in 2012, not 1952, and Allen Steele does not, so far as I know, have a spanking fetish, nor a "feisty-girls-who-inevitably-bite-their-lips-submissively-and-cast-demure-glances-downward" fetish, so the girls in this book are feisty and do shit and they don't stop being feisty and doing shit just because they've got boyfriends.

Jamey meets a cast of fairly stock YA characters: besides his whiny brat of an older sister, there is the precocious little kid and her mentally handicapped older brother, there's Jamey's best friend, there's the girl who's got a crush on Jamey and the girl Jamey has a crush on, there's the bully who's on his case from day one, and so on. Jamey and his pals have to learn the ropes, they become contributing members of the lunar colony, and when President Shapar launches an invasion to capture the base, Jamey winds up fighting to defend it. There are some deaths, obviously meant to be tearjerkers, but this is a YA novel so things get resolved relatively neatly.

So it may not quite achieve the status of science fiction classic, but Apollo's Outcasts is just the kind of book I loved when I was in the target audience age range, and who am I kidding, I still am the target audience. Recommended for all SF fans if you can stand YA.
Tweet