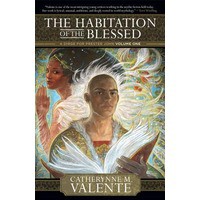 I absolutely loved Catherynne Valente's The Girl Who Circumnavigated Fairyland in a Ship of Her Own Making, which is a children's book filled with the madcap ideas crammed into every sentence. The Habitation of the Blessed is an adult fantasy novel filled with the madcap ideas crammed into every sentence, but whereas Fairyland is full of allusions to both traditional fantasy and other children's fantasy literature, Habitation is based on the medieval legend of Prester John. The allusions come fast and furious and unlike traditional fantasy, which has to make some kind of sense, medieval myth and allegory has no such obligation and frequently doesn't.

Valente is gifted with an imagination that few writers can match. It can be exhausting keeping up with her prose, as it is both wildly inventive and beautiful and densely packed with so many allusions, metaphors, and fantastic images that people who scan her prose too quickly will blink and miss something. In medieval legends, Prester John was a mythical king who ruled over a Christian land in far-off India or Africa or one of those pagan places. Valente writes The Habitation of the Blessed from the viewpoint of a 17th century monk who has discovered that the Prester John legend was true. The poor monk's ability to transcribe John's story is limited, because he has found three books which were the fruit of a Book Tree planted in the land John ruled, and like any fruits, they rot and go bad.

Each of the three books tells how John, the naive monk from Constantinople, arrived half-dead in a land where talking lions and eagles and swans coexist with giants and pygmies and even stranger beasts, and set about trying to convert these magical, immortal beings to Christianity. Needless to say, it doesn't go over as he hoped, and yet he eventually becomes king. How this happens slowly unfolds throughout the course of our 17th century monk's transcription, as he reads the account from John's point of view, from that of his wife, a woman who has no head and whose face is in her torso, and from that of an ancient creature who was once nanny to the children of this land's original queen.

There is an entire bestiary of creatures in this book, all of them with strange names you probably aren't familiar with (except gryphons), but all of which come from actual medieval legends. At first I thought Valente was making things up, but no, Google them; she was just taking advantage of her Classics background. Those medieval storytellers made up stranger things than anything Tolkien ever came up with. Valente manages to spin a plausible (yet fantastically weird) society consisting of immortal monsters and angels all coexisting in a land where anything you plant in the ground will become a tree bearing like fruits (i.e., plant a book and you get book trees; plant a bed and you get bed trees; plant a corpse and you get that person "reincarnated" as a tree). But Valente loves her ornate descriptive prose and dialog, and this book is told from half a dozen different POVs spanning relative centuries. It's not nearly as easy a read as Fairyland (or much of anything else). I'll also add that I'm a big fan of audiobooks, but I think this would be a tough one to absorb as an audiobook unless you're willing to really pay close attention to every word.

If you like Arthurian legends, or closer to the time period, the tales of Chaucer, the legends of Roland, Charlemagne, etc., and especially if you like historical fantasy, then you should love this book. It's got the sweet verisimilitude of an author who has done her homework and knows how to write, and I think it's a great experience for any fantasy fan who wants to sample European-flavored fantasy that isn't elves and trolls and dragons. That said, this really was an exhausting read and sometimes I felt like I was reading more a montage of fantastic ideas and word-bling bombarding my brain than a story. I believe Valente has follow-up novels planned, and I can't honestly say whether I'd prefer to read more Prester John or sample something else by her instead.
Tweet