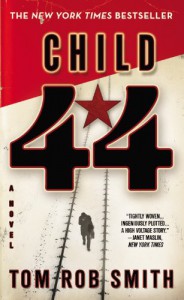 The first chapter starts with a pair of starving children in a Russian village in the 1930s, hunting a scrawny, skeletal cat, possibly the last surviving creature on four legs in the region. Catching it may be life or death for them, and I was hooked right from the start. Child 44 is a brutal book, despite a relative lack of gore. It's actually not the rampant starvation and devastation of World War II framing the hard early lives of the characters that make the book most brutal, nor is it the child serial killer who is the central MacGuffin of the book. It's the pervasive, arbitrary, boot-in-the-face totalitarianism of the Soviet police state that makes every single encounter a life-or-death exercise in paranoia.

After the prologue, Child 44 jumps ahead to the early 1950s, while Stalin's pogroms are still machine-gunning away. The protagonist is Leo Demidov, a war hero and State Security officer. At the beginning of the book, his life is about as cushy as life can get for anyone in the USSR who isn't a high-ranking Communist Party member: he has power, authority, a beautiful wife, a nice apartment, and he's been able to make sure his parents are comfortable.

When the son of one of his coworkers is killed, Leo is told that the boy was killed by a train. It was an accident. He will inform the boy's family that it was an accident. The boy was killed by a train. The boy was emphatically not murdered, not found naked with his mouth stuffed with dirt, and not seen being led from the train tracks by a strange man. This is the state's official line, and therefore it is what Leo is to believe.

When more children are found murdered, the state says they are all separate, unrelated incidents. Leo, who has been a true supporter of the state his entire life, starts to find the cognitive dissonance too much to bear. Leo also has a problem saying things he knows to be untrue, like when his loyalty is tested when he is told his wife is a foreign agent and must be denounced.

Pretty quickly, Leo's comfortable life goes to hell, and he is given a humiliating demotion. He and his wife are spared from the gulags only by the fortuitous death of Stalin. But even in a nowhere town in the Urals, Leo finds that the child-killer is leaving corpses, all over the country.

Child 44 was a gritty, thrilling story, as much about the horror of living in a police state where reality is what the state says it is and everyone measures what they will say and do according to what they think will keep them alive, never according to what might happen to be the truth, as it is about a serial killer preying on children in Stalin's Russia. Leo is an interesting protagonist: not precisely a "good" man but neither is he an evil one. He's been willing to work within the system his entire life, until the system turns against him, and then he has a sort of awakening of the conscience.

Unfortunately, it's at this point where I felt the story veered a bit away from its solid beginnings. Having stacked the deck so thoroughly against Leo and made it clear just how overwhelmingly powerful the government is and how no one can be trusted, giving Leo the ability to continue what amounts to an independent investigation without being caught requires one lucky break after another, and the lucky breaks just keep piling up. People with no reason to trust him or help him do, his wife who hates him suddenly becomes his most loyal ally, and he slips out of one trap after another. No single escape was unbelievable, but by the end of the book I was thinking Leo Demidov is one lucky Russian SOB. On top of this were piled some equally fantastic coincidences that constituted the surprise twists.

It was still a thrilling story with very interesting characters in what felt like a historically accurate setting, but I had to knock it down to 4 stars because of how much bending and stretching the plot had to do to allow an unlikely maverick protagonist to survive in the USSR. That said, I recommend it to anyone who likes mystery/thrillers and finds the premise interesting. This is the first book in a trilogy, and I'll certainly check out the next two books.

I listened to the audiobook version, and I'm of two minds about the narration. The narrator was very good and gave each character a believable Russian accent. Therein lies the problem: these are Russian characters speaking Russian, so obviously they don't have accents. But this reading did bring to life the plodding, implacable mood of the setting and the Russians who inhabit it. I suspect to a Russian speaker it would be a different experience, and reading the book (unless you mentally give Russian characters Russian accents as you read) would also give it a different atmosphere.
Tweet