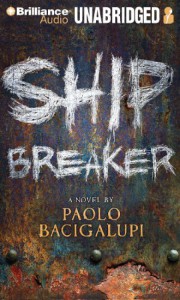 Paolo Bacigalupi is destined to be one of the Grand Old Masters of science fiction in another couple of decades. His books are uniformly excellent and capture perfectly the aesthetic of modern SF. His pet theme is environmental and economic catastrophe creating an impoverished, post-oil world. Ship Breaker reads very much like a YA version of his Hugo and Nebula-winning The Windup Girl. Although it's never explicitly stated that Ship Breaker takes place in the same world, it is similar enough that it very well could.

The main character, Nailer, is a ship breaker, a teenager who lives his life crawling around in old vessels trying to salvage anything that will earn a little coin. It's a dirty, dangerous job, yet he considers himself lucky to have it, because the alternative is worse. The dystopian element is not an oppressive government, but a nonexistent government, in a world of drowned cities.

When a storm washes an expensive ship and a pretty girl ashore, Nailer and his friends have to decide whether to help the girl or strip her ship (and her) for parts. Obviously we know which way Nailer must choose for the story to go further. The rich girl turns out to have been fleeing from enemies of her wealthy and powerful family, and so Nailer is dragged along on an adventure that will take him far beyond any horizons he'd previously imagined.

You can tell this is a YA novel by the fact that Bacigalupi tones down the violence a little (but there are still some pretty gruesome deaths), and sex is only implied. The story is kept fast-paced and adventurous, with Nailer going from one close call to another. I'd compare Ship Breaker favorably to one of Heinlein's juveniles; its science and worldbuilding is (of course) more contemporary, but the story is very much a boy's adventure, with a pretty girl (who has plenty of will of her own) as a motivating factor.

Highly recommended: if you liked The Windup Girl, you should like this somewhat lighter story told in a similar vein, and it's better than a lot of adult SF.
Tweet