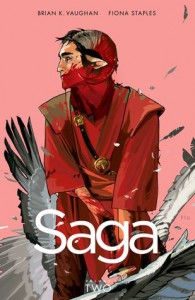 This is one of those series where lines like that are actually not totally ridiculous in context. Assuming you can accept a universe with giant evil space fetuses.

Saga is one of those graphic novel series like Neil Gaiman's Sandman (though completely different in tone), which if you can get past the "comic book" presentation and the inherent silliness of the premise, actually takes all those "silly" characters and turns them into real people in a well-crafted story that keeps expanding and adding characters and side plots.

Alana and Marko, our two lovebirds on the run from their respective people, with baby in hand, are now joined by Marko's parents. Like so many parents, they may not be thrilled with their son's choice of mates (since she's an enemy soldier that his people have been fighting a genocidal war with for generations), but a grandbaby makes everything better.

Meanwhile, freelance mercenary-assassin The Will has joined up with Marko's ex-fiancee Gwendolyn. After a little bloody detour, they rescue Slave Girl from the pedophilic space brothel, so now they have their own wee tag-along.

And all this started over a subversive interracial romance novel written by the grieving father of a war veteran.

Vaughan's storytelling and dialog continues to rise above what would otherwise be just another comic book space opera with bizarro aliens. There is graphic sex and violence, and a fat naked giant whose image you will wish could be unseen, but the visual medium is well-suited to this story; it would not be the same in a purely literary form.

Highly recommended for all space opera fans, if you don't require that it be anything within a light year of "hard SF," and even if you aren't normally into graphic novels.
Tweet