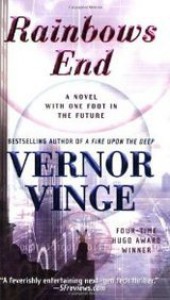 Although I did not love this book as much as his Zones of Thought space operas, Vernor Vinge has yet to disappoint me. Rainbows End is not really a cyberpunk novel, but "post-cyberpunk." It takes place in a world that looks a lot like ours, if you just extrapolate out the technology. (Almost) everyone is wired, you can carry petabytes in your pocket (the sum total of all recorded human media on the equivalent of a USB drive), the world is globally-connected in ways we still are dreaming about but have not yet achieved, and sensory overlays can turn the physical world into anything its owners or visitors wish to visualize.

Vinge drops lots of recognizable brands and technology: Google is still around. So is the University of California at San Diego, where much of the action takes place.

The threats now are not so much Great Powers lobbing nukes at each other (though that's still a remote possibility) but the fact that the potential for nuclear, chemical, biological, and network terrorism is now also greatly expanded.

The main character is Robert Gu, who was a great poet at the end of the 20th century, but who has slipped into dementia. Until new medical technologies are able to not just reverse his mental deterioration, but give him the body of a teenager as well. There are a couple of catches. The first is that, like most of his fellow rejuvenated senior citizens, he is hopelessly unskilled and inept in the modern world. He has to go back to high school, in a novel "integrated learning environment," to learn how to function and acquire basic skills.

The other catch is that Robert's immense poetic genius was not restored along with his mind. He can still understand poetry, but he can no longer write it. This, to him, is almost worse than not being restored at all.

Initially, it's really hard to get invested in Robert Gu's trials, because it also turns out that he was and is a mean bastard. His genius for poetry was accompanied by a genius for hurting people and an inclination to lash out at any target of opportunity. Early in the book, that's his thirteen-year-old granddaughter, Miri, who's been doing nothing but trying to help him, out of evidently misguided affection and loyalty. At that point, Miri's parents (both of whom have important military jobs that involve standing watch to prevent all those Very Bad Things from happening) almost kick the SOB out of their house, and I was rooting for them to do so.

The plot involves many other characters, but Robert Gu and his granddaughter are the ones at ground zero. There is a multinational conspiracy, an annoyingly capable rabbit, and a globally-televised LARP battle between (thinly-disguised) Discworld and Pokemon fans which causes a library to dance.

This is true Big Idea science fiction, very futuristic and even optimistic, despite the emphasis on all the new ways that mankind can exterminate itself in a matter of hours. Lots of characters get a turn in the spotlight, some are more interesting than others, and Robert Gu never does become precisely likable, but he does do a bit of a heel face turn.