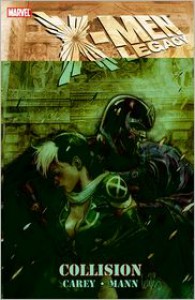 So I have started grabbing whatever X-Men volumes are on the shelf at the local library, to catch up on my comic book lore since I stopped reading them regularly about 20 years ago. I no longer have any idea what the series' recent continuity is, but I note with wry amusement that the movies are pretty much following the original Claremont storyline from the 80s. (Wonder when the Shi'ar will show up.)

X-Men Legacy: Collision is from one of the gazillion different X-Men spin-off series that took over comic book shelves starting in the 90s, like the zillion different varieties of Coke and Pepsi on grocery store shelves.

At least I recognized most of the characters this time. On the plus side, this volume features Rogue prominently. Rogue was always one of my favorites, and I remember her way back from her Brotherhood of Evil Mutants days. And I kind of liked the way Clay Mann and Tom Raney drew her and the other women - not quite zaftig, but definitely not the pneumatic/anorexic look that's been popular with superheroines lately. 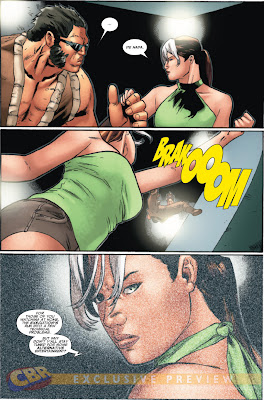 Anyway, Rogue and Magneto (I guess he's still a good guy? Can never keep track of which side he's on — seems like all the former X-Men villains are good guys now) head off with Indra, Loa, and Anole (three of the newer X-Men whom I am not familiar with) to Mumbai, where Indra is supposed to have an arranged marriage to the girl that his now-comatose brother (who I absolutely 100% guarantee is at some point in a future storyline going to come out of his coma with superpowers of his own) was supposed to marry.

Wait a minute - the Indian guy who's a mutant with pink skin and can create psychokinetic armor is called "Indra"? Really, Marvel? Haven't we gotten past patterning "international" superheroes on cultural cliches, fairy tale characters, and gods? Would a devout Hindu really go around using a god's name as his superhero moniker? And of course it's India therefore arranged marriages. Sigh.

The plot: there is this extra-dimensional city called the Corridor filled with "post-human" superhumans called the Children of the Vault, and one of them, a really powerful chick with the attitude of a rebellious fourteen-year-old, runs away, coincidentally arriving in Mumbai just when the X-Men are there. Apparently the Children of the Vault have crossed the X-Men before, so there are the usual big battles, grudge-matches, and casual destruction of large swaths of real estate. (In fairness, Mumbai is no worse off than New York City, which gets destroyed about eight times a year in the Marvel universe.)

So, umm, meh. Nice to see Rogue has grown up a little. Magneto seemed to be phoning it in, and I don't care about these new characters. The Children of the Vault are just another endless supervillain factory. Basically, this volume is Rogue and Magneto babysitting a bunch of X-newbies no one cares about.

Helpfully, the end of this volume had extensive writeups of all the main characters, including 4-6 (dense, small-print!) page summaries of their entire histories since their origins. I was amused that I remembered most of it, and then about halfway through (corresponding about to when I stopped reading, some time in the late 90s) there appeared all these new alien races, supervillains, worldwide events, and apocalypses that I've never heard of. And various things that have obviously been retconned into the characters' histories, like Rogue growing up in a commune and having mystic hippies for parents. WTF?

Reading Magneto's entire 6-page history all at once really made it obvious how inherently silly a comic book universe is, especially when trying to maintain some kind of continuity with the accumulated cruft of 50 years of history. But ah, good times. I sure loved the X-Men back in the day.

But seriously, what is the deal with Mike Carey hinting at a romance between Rogue and Magneto? That's just wrong.
Tweet