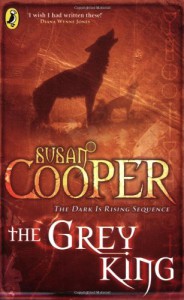 This fourth book is where the Dark is Rising sequence begins to pick up its pace and become more epic, weaving the final battle of the Dark vs. the Light into a retold Arthurian mythos. Rereading it as an adult, I began to feel again a little bit of the magic that so entranced me as a child when this was my favorite series ever.

In The Grey King, Will Stanton, last of the Old Ones, has been sent to stay with an uncle in Wales to recover from an illness, thus continuing to contrast his humanity (physically he is still an eleven-year-old boy) with his immortal nature as an Old One. He is coming into his power and is now able to work magic and know things without everything being fed to him by his mentor Merriman, who makes only a token appearance in this book. Indeed, this is Will's first true solo quest. Notably, the Drew children, who starred in book one and shared the story with Will in book three, are completely absent and unmentioned here.

On the day of the dead, when the year too dies,
Must the youngest open the oldest hills
Through the door of the birds, where the breeze breaks.
There fire shall fly from the raven boy,
And the silver eyes that see the wind,
And the light shall have the harp of gold.

By the pleasant lake the Sleepers lie,
On Cadfan’s Way where the kestrels call;
Though grim from the Grey King shadows fall,
Yet singing the golden harp shall guide
To break their sleep and bid them ride.

When light from the lost land shall return,
Six Sleepers shall ride, six Signs shall burn,
And where the midsummer tree grows tall
By Pendragon’s sword the Dark shall fall.

Susan Cooper definitely has a more poetic pen than Rowling, and in The Grey King you get a lot of Welsh — Welsh landscapes, Welsh mythology, even a little bit of Welsh language lessons. The Grey King is the Brenin Llwyd, a great Lord of the Dark who dwells in Cader Idris, a misty mountain over a pleasant farm valley, where six sleepers lie sleeping, to be awoken by a harp of gold — if Will can find it and play it and prevent the Grey King from preventing him.

Also to play a role in this story is Bran, the Raven Boy, an albino the same age as Will, whose true nature is revealed in dramatic and powerful fashion.

Highlights of this book, besides the magnificent Welsh scenery, were the bits of magic, much more forceful and powerful this time. Will isn't playing around any more, but he's no god or even a full-fledged wizard, and the Light and the Dark both have hard limits on what they can do, bound by universal rules. Susan Cooper gives the magic powers a sense of mystery and epic scope even while applying appropriate narrative constraints and without trying to enumerate them in the style of a modern fantasy novel.

There is also much more powerful human drama this time around. Caradog Prichard, the human "villain" of the piece, is a nasty piece of work, yet ultimately just a man, and so Will's inevitably doomed efforts to save him from his own folly read as real and yet foreordained. There is an eternal human tragedy replayed as Will proceeds toward the final stage of his quest.

Although it's been too long and I'm now too much of a grown-up to feel the same wonder and thrill I did reading this in elementary school, the first three books were pleasant but not really that much fun and kind of left me wondering why I loved them so much as a child, while this book shows Susan Cooper's talents as a dramatist and storyteller more.
Tweet